Skip to content
With discounts up to 20-40% in shop!
Tags: Wedding
The French wedding cake, aka the piece montée, is not a wedding cake at all. Hear about the croquembouche, an architectural masterpiece in baking. 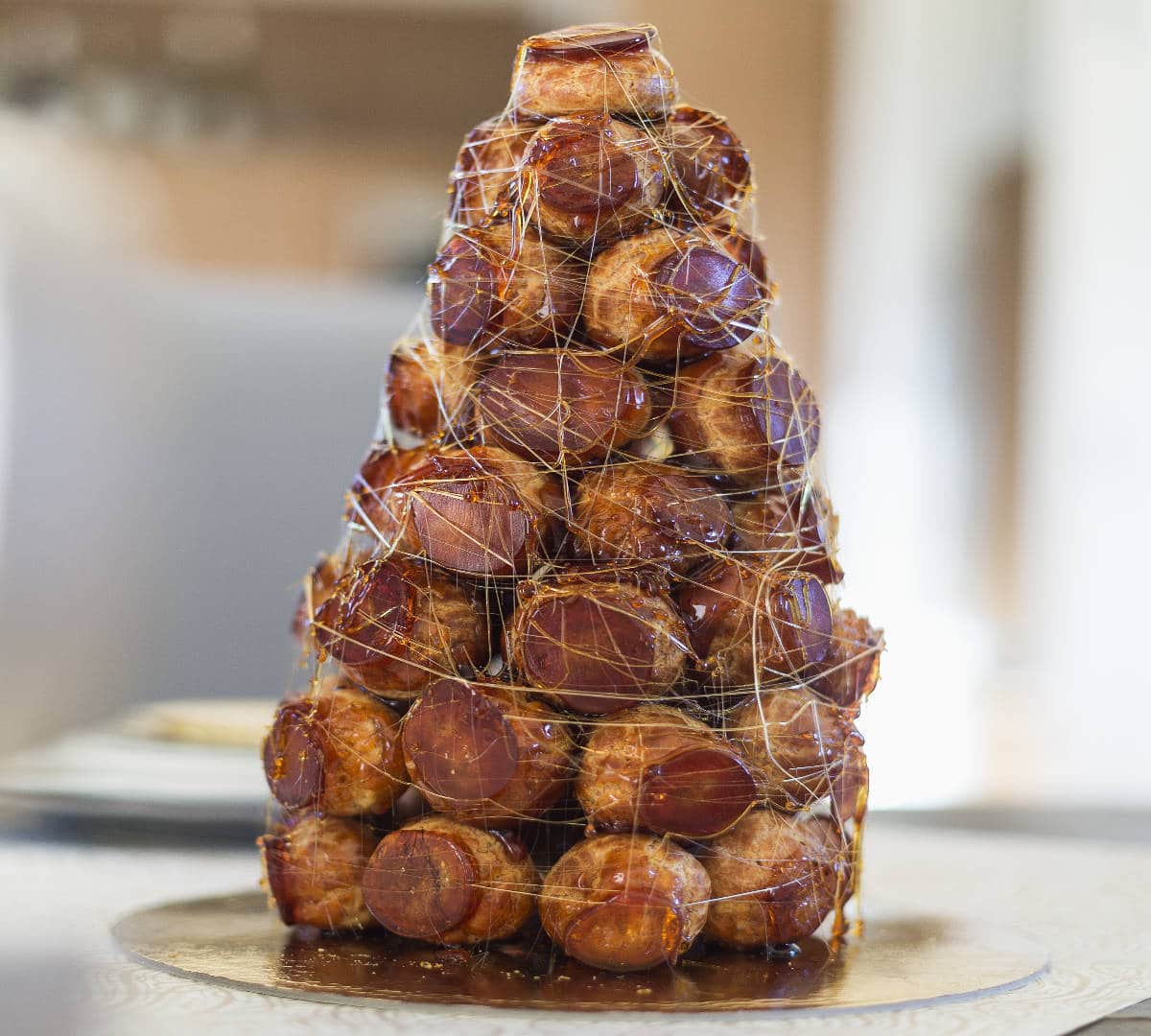 If you’ve been to a few weddings, you know that the two stars are usually the dress and the cake. (I suppose the groom counts as well, but anyway.) One of the things that always catch foreigners off-guard when they attend a French wedding, is that there is usually is no cake.

The French wedding cake is actually not a wedding cake at all. Known as the pièce montée meaning “mounted piece”, it is actually a sculpture mounted of small confectionary pieces of dough. No traditional 3-tiered cakes covered with fondant, marzipan, and ganache here.

And have I mentioned, the pièce montée is not meant to be cut into with a knife?

The pièce montée is alternatively referred to as the croquembouche, meaning “bite in the mouth”. This is because it is made from assembling together in a pyramid shape a small French pastry known as the pâte à choux.

The traditional french pâte à choux is made from flour, butter, sugar, and eggs, a little bit like a donut hole. (My fellow Canadians will note the similarity to Timbits.)

In all, the pâte à choux is rather easy to make. The difficulty comes in assembling the small balls of pâte à choux to each other and mounting it in a pyramid shape with caramel, cream, and melted sugar.

It was invented in Paris in the early 1800s by one of France’s first celebrity chefs, Antoine Carême, in the era of Emperor Napoleon Bonaparte. Câreme grew up in the kitchens, having been abandoned as a child by his parents during the French Revolution, and finding shelter in a brasserie which trained him as an apprentice and gave him room and board.

He went on to train as a patissier (baker) and gained fame for his piece montées which were several feet high. So renowned were his masterpieces, he began to mix in high society, eventually even becoming the chef de cuisine to the Prince Regent of England, later George IV.

The key to a beautiful croquembouche is that it must not be lopsided or uneven. And the higher, the better, to ramp up the “wow factor”. It is an architectural technique that many a baker has tried and failed at!

As you can imagine, it isn’t cheap to have a croquembouche, since the technique requires a lot of savoir-faire. As such, the most common occasion that you will see a croquembouche is at a wedding and other glamorous events. (You may also see at the end of a repas de fête (Christmas dinner), but it is less common than the bûche de Noel cake.)

At weddings in France, you will often see the piece montée decorated with flowers or colored to tie into the rest of the wedding decorations. Some newlyweds may even get piece montées made out of macarons rather than pâte à choux to keep with the architectural tradition, but to put their own touch on their festivities.

If you can imagine the scene: After the repas de noces (reception dinner), typically the lights will go down and a crowd will gather. With music pumping (think “We are the champions” by Queen), the piece montée is usually rolled out on a large table accompanied by firework sparklers, champagne, and a whole host of smaller desserts for guests to pick from.

There may be a few varieties of smaller cakes as well but it is the piece montée that everyone is looking at. (And the bride and groom of course 😉 ) The couple will toast each other and their guests and then feed each a croquembouche (or two.)

Guests are then invited to join in, and the party begins in earnest to long into the night… Vive less mariés! meaning long live the newlyweds!

So if you are looking for that piece de resistance, that ultimate Parisian touch for your wedding, why not try to get a croquembouche as a French wedding cake? Along with some champagne, of course!

If you enjoyed this article, you may want to read more about interesting traditions at French weddings. From the facebook announcements to not inviting people to dinner, there is plenty to surprise (and question).

21 Interesting facts and history of the Eiffel Tower

Reality of Living in Paris: 47 Pros and Cons

Protests in France: Should everyone strike like the French?