Skip to content
With discounts up to 20-40% in shop!
Travel to the historic medieval town of Albi in Occitanie. We look at what to see, things to do, what to eat, and more. 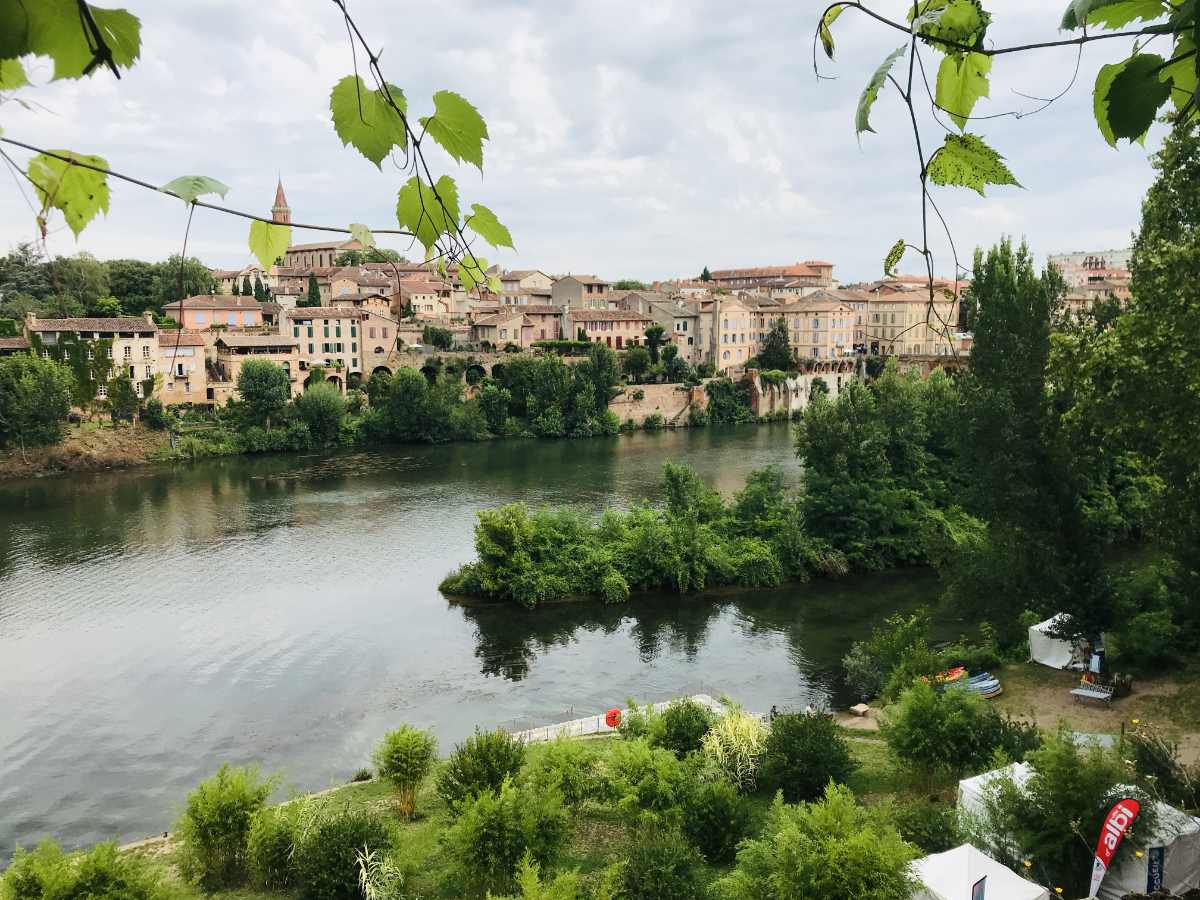 On the banks of the Tarn river in a corner of south-east France, is the medieval town of Albi. Located in the Occitanie region of France, it is a beautiful city to visit, its streets are lined with impressively old buildings and a number of other attractions.

A city of art and history, the archeology shows that the history of Albi can be traced back to the Bronze age (3000 BC). After the Roman conquest of Gaul in 51 BC, the town became Civitas Albigensium.

But it is the medieval era installation of Archbishop of Albi in the area, along with the building of a large cathedral and attached palace, that really turned it into a thriving economic center in this part of France.

These days Albi has a thriving food and drink scene, a world-class museum, and a wide range of things to do and see. In addition, if you are visiting Albi, the nearby villages and towns are well worth a visit too, like Castres, Lautrec and Toulouse.

So let’s check out the best things to do and see in Albi, shall we? Allons-y!

The Cathedral Basilica of Saint Cecilia, aka Albi Cathedral is thought to be the biggest medieval era brick building in the world. It was begun in 1282 and was under construction for 200 years.

A UNESCO world heritage site, the earliest church that stood here dated back to the 4th century. It is named for Saint Cecilia, a wealthy Roman noblewoman and martyr, who was a patroness of musicians.

The current cathedral is a medieval gothic cathedral and was built to impose Catholic rule in the area.

In the 12th century, Albi was part of the Province of Languedoc, ruled by the Count of Toulouse, who owed allegiance to the King of France. The region became a battleground between the established church and the followers of a dissident religious movement called Catharism.

The Cathars had a strong presence in Albi at the time, leading the Catholic pope to launch the Albigensian Crusade in 1208 to destroy the Cathars in southern France.

It ended in 1209 with the defeat and massacre of the Cathars at Carcassonne, and the end of the semi-independence of the states of Languedoc.

The Cathedral was built a few years later to install a Catholic bishop in the area, and ensure that Catharism did not reestablish itself in the area.

Inside, you can see its beautifully preserved blue and gold ceilings as well a large rood screen (jubé in French) that is on one side of cathedral. It is an ornamental and intricate fence that was reserved for the clergy to pray without being disturbed.

Entrance into the cathedral is free, however there is a small stipend to pay to enter into the portion behidn the rood screen.

Just next to the River Tarn, you will find the impressive Berbie palace and its beautiful gardens.

Dating to the same era as the Sainte-Cecile Cathedral and built in a similar brick, is one of the oldest palaces and among the best preserved in France.

It is not a royal palace, but one that was intended as a home for the episcopal Bishops of Albi who presided over the cathedral next door.

While the palace costs around €10/adult to enter (more on this below), the gardens of Berbie and its ramparts are free to enter. There are gorgeous views on all sides from the ramparts and it definitely the place to visit in Albi.

He is known for his post-impressionist paintings of late 19th-century Parisian high society, where he lived and worked.

Born in Albi, he was born into an aristocratic noble family that ruled over the area. If Henri had outlived his father, he would have inherited the family title of Comte de Toulouse-Lautrec.

However, his parents were first cousins and this inbreeding caused many medical issues. He was known for being quite short due to a medical condition that is sometimes called Toulouse-Lautrec Syndrome, when as a child he broke both his legs.

His medical problems were added to by his alcoholism, and he developed an affinity for brothels and prostitutes, dying young at the age of 36. His work remains of much renown however, as one of the most famous artists in France.

The museum contains many the works that were donated by his family, with everything from drafts to completed versions of his most famous paintings. There are also newer artists and sculptors featured in the museum.

The upper floors of Berbie palace also offer beautiful views of the River tarn and the city all around. The museum is newly renovated and fully accessible for strollers and wheelchairs. Entry to the museum and Berbie palace is €10/adult and free for children.

Albi has a small centreville with many old medieval buildings that have now been converted into shops and restaurants.

In traditional red brick and columbage, you will feel like you stepped into another century as you are walking around Albi.

Most of the central area is pedestrianized, with large parkings underground. (Note the parkings get full quickly in the summer, so plan to arrive earlier in the day to get a parking spot.)

Pont Vieux (meaning “Old bridge”) is the oldest bridge in Albi, with a bridge standing here since 1035 AD.

It was originally called Pont du Tarn and the current bridge’s oldest parts date back to the 13th century. It used to be a toll bridge where goods coming to Albi were taxed.

In the 15th century, houses were built on the pillars of the bridge to make the structure more solid, similar to the famous Ponte Vecchio in Florence, Italy.

The houses were eventually destroyed by floods, and the bridge widened to accommodate carriage and eventually traffic.

6) Take a boat ride from the quay

When you stroll along the quays of the Tarn river, you will notice in the water the city’s traditional flat-bottomed boats, called gabarres.

Until the beginning of the 20th century, these historic boats were used to transport goods to Bordeaux. These days, they carry visitors to Albi on pleasure cruises lasting 45minutes, 1h30, or 2 hours, depending on your preference.

There are several boat departures from the banks of the Tarn river between 11 am and 6 pm, but they do fill up fast in the summer season if you are interested in going out on river.

Right in the center of town you will find an indoor food market called the Marché Couvert.

It dates back to 1860, and was inspired by Les Halles de Châtelet, the old covered food hall in Paris (that is no longer standing).

It is a farmer and local producers’ market, selling everything from wines and cheeses, to seafood and patisseries and other local specialties from Occitanie. Entry into Marché Couvert is free.

The south west corner of France is famous for its meaty foods, such as the cassoulet, foie gras, and magret de canards (duck breast).

Albi in particular, is famous for its foie gras albigeois, which is a popular delicacy in French cuisine. You will find it usually in local restaurants served as an appetizer with toast.

As you are walking down the streets, look for a narrow set of stairs leading to the Cloister Garden of the Saint Salvi monastery.

With the original buildings dating back to the 11th century, it is a beautiful spot for some peace and quiet. The cloister gallery has been listed as a monument historique since 1922. Entry into Cloisters gallery is free.

How to get to Albi?

Albi is about an hour away from Toulouse by car or TER train.
To get to Toulouse, you can take either the TGV high-speed train from Paris (4h20) or fly into its international airport. Alternatively You can take a guided tour from Toulouse that will bring you to Albi and nearby Cordes-sur-Ciel.

You can visit Albi as a day trip from Toulouse, or spend the night if you wish.

Albi is a small town, so I would recommend staying in Toulouse and visiting Albi as a day trip.

If you enjoyed that article, you may want to read more about traveling around the Occitanie region of France.

Visiting Sète in Occitanie: The Venise of Languedoc

Visit the beautiful village of Lautrec in Occitanie

9 Foods in Occitanie: What to eat and drink