Skip to content
With discounts up to 20-40% in shop!
Visit Grotte Chauvet, a cave network with some of the earliest prehistoric human cave paintings in the world. Located in the Rhône Alps, France. 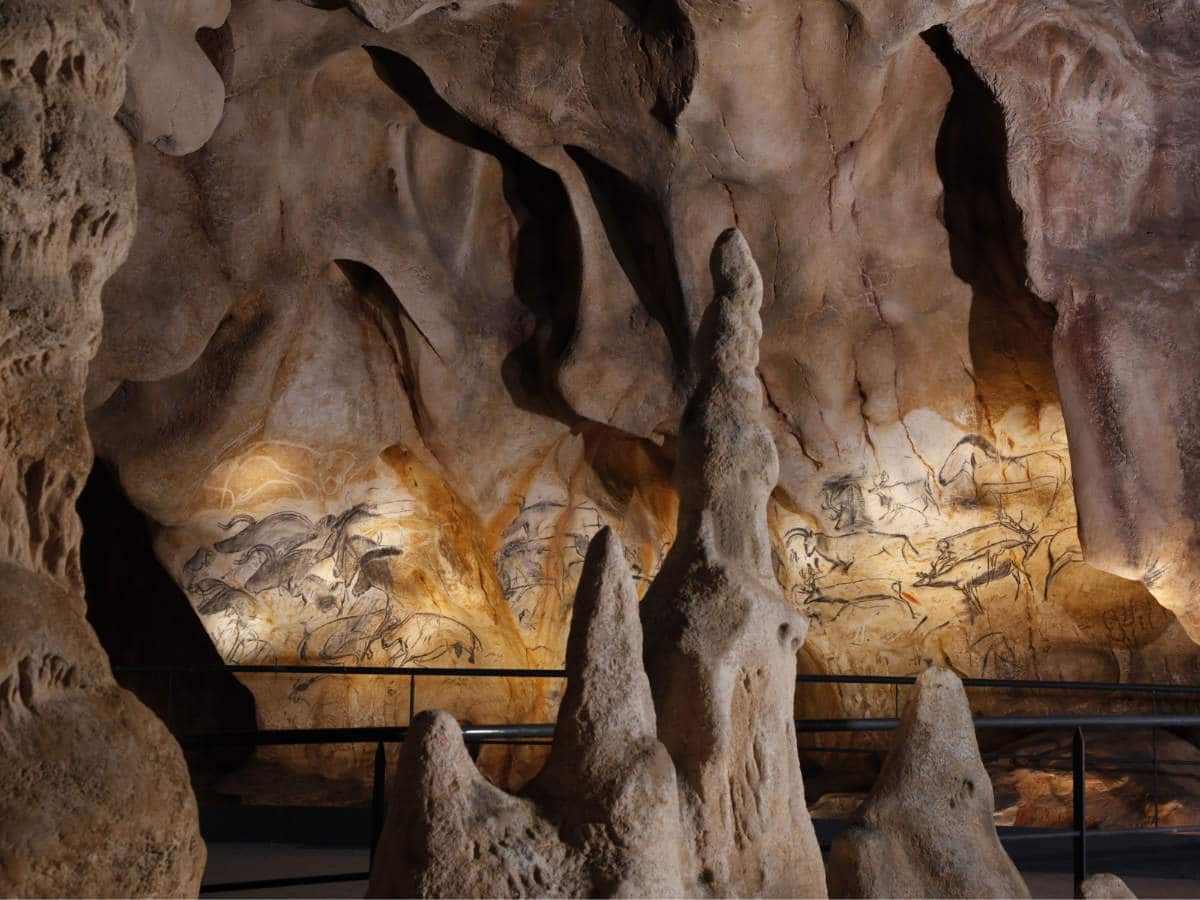 Courtesy of Patrick-Aventurier
(As an Amazon affiliate, we may earn commissions for certain purchases. Please note, all information is provided for entertainment purposes only. See our disclosure policy for details.)

One of the greatest cultural treasures in the world is located in the heart of department of Ardèche, in the center of France.

Known as Grotte Chauvet (Cave Chauvet), it is a cave network which has some of the earliest known Paleolithic human cave paintings. Dating back about 28,000 – 32,000 years old these are among the oldest in the world.

A cave complex near the village of Vallon-Pont-d’Arc, it was discovered on December 18, 1994 after a group of cavers entered the cave and noticed everything from handprints, engravings, and drawings of a variety of animals on the walls of the cave.

Located within a couple of hours of the cities of Lyon, Avignon, and Valence in the Rhône Alps region, the Chauvet-Pont-d’Arc Cave complex is truly one of the most spectacular archeological and anthropological sites in existence.

There are several panels with some of the earliest known figurative drawings, making it one of the most important prehistoric art sites in the world. These spectacular images were created by prehistoric humans, or Homo sapiens, as they roamed the European continent.

Its discovery on December 18, 1994, by three spelunkers, Jean-Marie Chauvet, Eliette Brunel-Deschamps, and Christian Hillaire made headlines around the world.

Now, if you do look for it, you might notice that it is called “Grotte Chauvet 2”, and not just “Grotte Chauvet”. That is because the actual cave is too fragile to allow visitors.

Grotte Chauvet 2 is an exact replica of the original cave that has been built to educate visitors about life in the Paleolithic era. If you look on Google Maps or on your GPS, you will see both locations, with one of them marked as “not accessible”.

So is Grotte Chauvet 2 actually worth the visit, if it is not the original? Let’s find out more, shall we? Allons-y!

Why the original Grotte Chauvet is not open to tourists

In order to understand why the original Grotte Chauvet is not open to the public, we have to reference another famous set of prehistoric cave paintings in France,  la Grotte de Lascaux.

The Lascaux cave was discovered in 1940 by four teenagers near the town of Montignac, in Dordogne, France. With paintings dating back to 17,000 years, it was visited by millions of visitors, before being closed to the public in 1963. But an irreversible cycle of decay had begun.

Fungus, which cannot be removed, now covers many of the paintings at Lascaux. The carbon dioxide caused by the breath of the tourists caused the additional moisture, which has now washed away many of the pigments and turned the walls grey.

A celebration meant for the 70th anniversary of the discovery of the Grotte de la Lascaux, was likened to a “funeral service”.

And this is why when Grotte Chauvet was discovered in 1994, French authorities immediately swooped in to protect the cave. Especially since the Chauvet cave paintings are estimated to be almost twice as old as Lascaux, at 32,000 years old.

The original Chauvet cave is located along the Gorges de l’Ardèche, while the replica Grotte Chauvet 2 is located around 6miles (10km) away in a rather modern complex.

Along with the cave itself, there are several other things to visit around the exhibition.

The Grotte Chauvet 2 is also considered quite fragile, and is also only visitable in small guided tours. Photos are not allowed inside the cave.

Inside, you will see tens of small animal paintings, depicting at least 13 different species. There is everything from horses, lions, leapards, and rhinos to mammoths, etc. and other animals from the prehistoric era.

There are also palm and handprints, attesting to the intelligence of those earliest homo-sapiens. Of note is a particular handprint with a crooked finger, who by all accounts was quite the artist as his/her work can be identified in several areas of the cave.

Many of the animals have been sketched and carved as if in motion, showing the artists’ keen sense of observation and acuity. The age of the original cave paintings is based on over 80 radiocarbon samples taken for dating, indicating that some of the paintings date back to 35-30,000 years.

The cave is named after one of the explorers, Jean-Marie Chauvet, but that also is not without controversy. The original hole entrance to the cave was found by a man named Michael Rosa (known as “Baba”) and became known as Le Trou de Baba, or Baba’s Hole.

According to reports, a decision was made to come back later, when Chauvet came back without him. In the end, it would be Chauvet who had his name attached to one of the world’s greatest treasures, while Michael Rosa remains quite unknown.

In addition to the main cave, there is also an educational exhibition called the Aurignacian Gallery.

With life-size models of the earliest humans as well as ice age creatures like the wooly mammoth, there are several knowledge panels for visitors to read and explore.

The exhibition indicates it should take around an 1 hour to get through the exhibit, although if you go with small children who can’t read (like I did), it will be much quicker!

If you visit during the summer tourist season, you will find several knowledgeable guides around the Grotte Chauvet 2 complex.

Displaying replica artifacts of human tools, the guides discuss at length what life was like in the Paleolithic and Stone Age era.

What they ate, how they hunted, what they wore, etc., the guides give plenty of insight on what it must have been like for those cave artists.

Preparing for your visit

The cave at Grotte Chauvet 2 is kept at cool temperatures, to replicate the original as much as possible. A light sweater or jacket is recommended, especially for small children.

It is around a 5-10 minute walk uphill towards the entrance of the premises to the building entrance, depending on if you are heading over with strollers and small children, etc.

Tickets cost around €17/adult and €8.50/child over 10 years old. Children under 10 are free. Most of the Grotte Chauvet 2 complex is quite accessible for strollers and wheelchairs, but it can get crowded.

Pont d’Arc and other sights nearby

Located about 600 yards (550m) away from the original Chauvet Cave, is the Pont d’Arc, a natural bridge created by the water flows of the Ardèche river flowing through the Gorges de l’Ardèche.

It is about 6 miles (10 km) away from the replica at Grotte Chauvet 2, and a popular destination for bathers, kayakers, and hikers who wish the enjoy a bit of nature.

The natural arch of the Pont d’Arc was formed around 124,000 years ago, by the effect of erosion in the limestone rock. Given the many decorated caves in this area, it is thought that this natural bridge would have frequented by homosapiens (also known as Cro-Magnon or Aurignacian) since at least the Paleolithic era.

It is known to have served part of the Romaine d’Antonin, an old Roman road in the 2nd century that connected the old Roman cities of Nîmes and Valence.

In addition, the Grotte Chauvet 2 is relatively close by to another famous cave in the area, the Grotte de Choranche. The large cities of Lyon, Grenoble, and Vienne are also easily accessible, so you can easily make the trip to visit there as well.

How to get to Grotte Chauvet 2?

The Grotte Chauvet 2 is only accessible by car, with the closest train station in the nearby town of Pierrelatte about 20 miles (33km) away.
If you are driving, one thing to play close attention to is that you should program “Grotte Chauvet 2” on your GPS. Both will show up on your GPS, and they are not within walkable distance, so you really want to be sure to program the address of the correct one.

The guided tour inside the Chauvet cave takes about 1 hour. However, plan to arrive at least 15 minutes in advance from the parking lot to pass through the entrance, and to the actual cave entrance to be on time with your tour guide.
In addition, the Aurignacian Gallery should take about 45min-1 hour to visit. There are also often animations by knowledgeable guides in the park area discussing human life in that era, so you will want to keep that in mind as well, during your planning.