Skip to content
With discounts up to 20-40% in shop!
Travel on the historic steam-powered Train de l'Ardèche, along the old Viverais tracks to the scenic Valley of the Doux and the village of Lamastre. 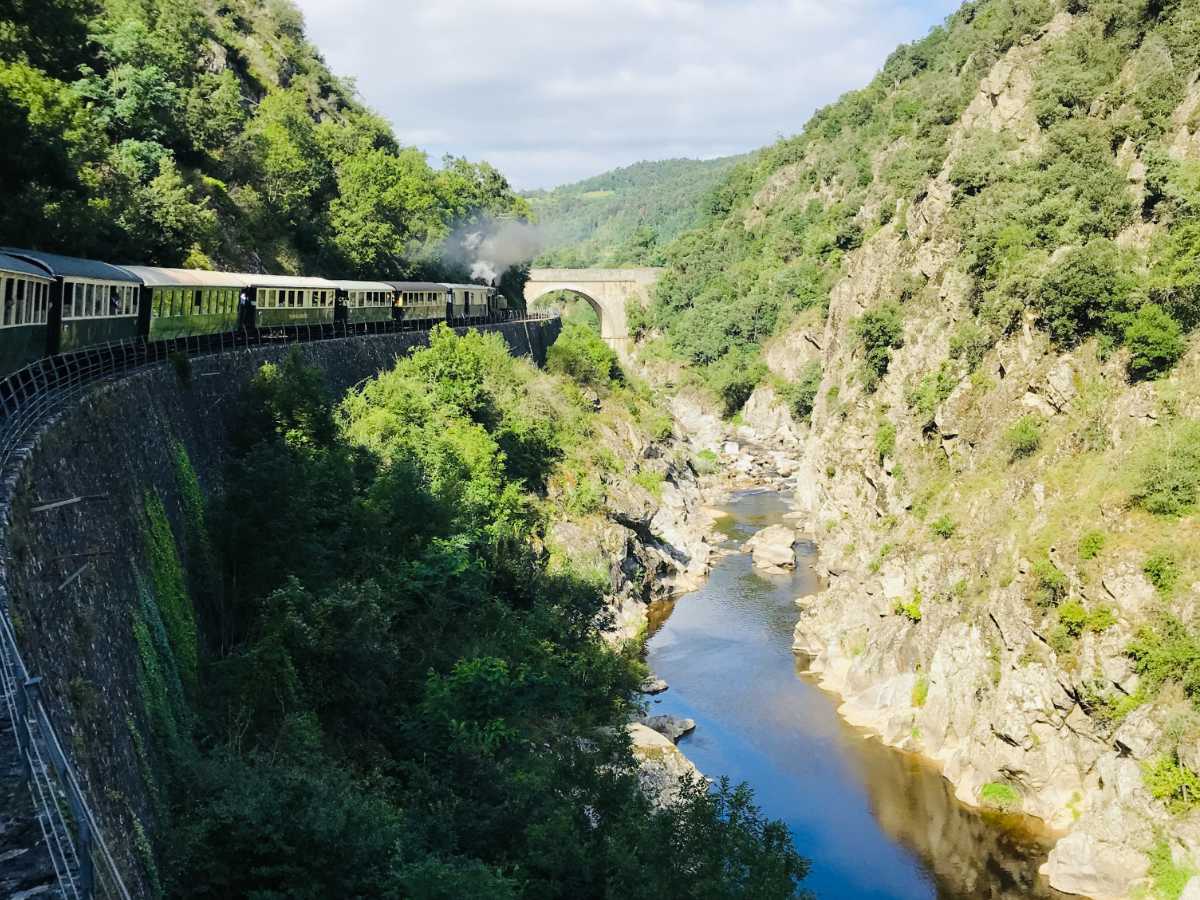 France may be famous for its famous high-speed TGV trains (train à grande vitesse), but if you have a harking for simpler times, you may want to take the tourist Train de l’Ardèche.

Previously known as the Chemin de fer du Vivarais or Train du Viverais, this is one of the most popular tourist attractions in the Ardèche. A foresty area in the center of France, the Ardèche is a department in the Auvergne-Rhône-Alpes region, about 55 miles (90 km) from the city of Lyon.

These old steam trains, using systems dating back 130 years, run along a network of lines constructed around the Vivarais network.

The original train system was closed by the French government in the 1968, when they became obsolete. It was taken over by a group of former employees and enthusiasts who put the old steam trains back into action.

These days, it regularly attracts tourists from all over Europe. Travelling along a portion of the Gorges Doux (Valley of the Doux), the area is otherwise inaccessible and is known for its beautiful unspoiled landscapes.

There are actually a few different routes that the Ardèche trains take, so let’s have a look at the most popular ones, shall we? Allons-y!

By far, the most popular route to take is called the Mastrou, which goes along the 17 miles (28 km) from the train station at Tournon St. Jean to the small village of Lamastre.

This historic journey travels along the Gorges Doux before steaming along wide landscapes of fields, villages, and countryside. The train stops at Lamastre, which is a charming little village with many a restaurant catering to the crowds of train visitors.

I would recommend a small restaurant called Chez Germaine which looks small from the street but on the other side has a large expansive terrace with views of the valley below. (It also has a secure play area for kids, which is great if you are going with small children who don’t have the patience for a long French meal!) It is quite popular however, so you would need to make reservations a couple of days in advance.

You can get a return ticket to your car in Tournon St. Jean, as the train plans on a 3 hours stop for lunch in Lamastre. It costs around €23/ adult and €11/child over 10 for a return ticket. Children under 10 years old are free.

Alternatively, you can take a one-way ticket and take your bike aboard so you can return along the Dolce Via cycling track.

If you are looking for something sporty, but don’t have your own bike with you, you can opt for a Journée Vapeur + Vélorail ticket.

Hopping on the same Mastrou train, you hop off at the stop at Boucieu le Roi train station, and get on specially adapted pedal-bike trains to complete the circuit.

I should note, only the two people in front pedal, while the others at the back just enjoy the views. In addition, each pedal-train is on the same track but not attached, so if you are a slow pedaler, you might want to pick one of the pedal-trains at the back!

How to get to the Train de l’Ardèche?

The Train de l’Ardèche is only accessible by car. The closest train station is in the town of Tain-l’Hermitage – Tournon about 3.5 miles (6km) away.
It is about 1h20 from Lyon and Grenoble by car, and 35 minutes from the city of Valence. Other towns nearby include Montélimar and Romans-sur-Isère.
Full address for the GPS: 111 route du Grand Pont, Gare de Tournon St. Jean, F-07300 St Jean de Muzols

If you take the long train tour to Mastrou or the Journée Vapeur + Vélorail, it will take the better part of the day. For shorter train tours, you can find the schedule and itineraries here.

14 Day trips from Lyon you will love

Aix-Les-Bains: The Thermal Spa town of the Royals