Skip to content
With discounts up to 20-40% in shop!
(As an Amazon affiliate, we may earn commissions from qualifying purchases. Please see our disclosure policy for details.)

Ahh, Paris in the summertime. The sky is blue, the birds are chirping, and the rosé is on ice. All is well until you go to take the famous Parisian Metro. Goodbye joie-de-vivre, and hello smelly-armpit that you are desperately trying not to breathe in.

There may be something to that old adage of French people smelling bad. Monsieur Pewpew can’t help it I’m afraid, there isn’t much air conditioning in France. Bien sûr he is going to perspire. A little sweat and body odor never killed anyone, did it? I’ll leave you to ponder that.

The heatwave is on this week in Paris, with temperatures expected over 40°C (104°F). And Paris is in the North of France. Temperatures in the South will be even higher, with Marseille sometimes getting up to 50°C (122°F).

So why don’t most buildings have aircon? Let’s go through the reasons (and debunk them), shall we?

French people fear the “current of air”. It is why scarfs are so popular in France, they don’t want to leave their necks exposed. I’m not kidding. Many a foreigner has looked on in bafflement while a Frenchman/woman has tried to explain the great afflictions possible due to the legendary courant d’air.

One of the top TV stations in France, LCI, even advises against sleeping with the fan on lest that dreaded “courant d’air” makes one ill (link in french). And here you thought it was germs that make you sick, when it was actually that stray gust of wind.

The “Thermal Shock”, as it were, is when the body experiences a quick change in temperature, such as jumping into cold water. Or suddenly going from outside into an air-conditioned building. French RTL TV station gives useful instructions on how to avoid the “choc thermic“, with advice such as open your window before you go out so that your body acclimatizes to the outside temperature (link in french).

French people usually advise against more than a 10C° difference in temperature. Now, I lived in Dubai for a few years as a child and with temperatures easily going up to 50°C (122°F). I can tell you that in Dubai nobody is putting the aircon at 40°C (104°F) or even 30°C (86°F) because that would be ridiculous.

If people started falling sick over such a difference in temperature, people in the Middle East and Southern U.S. states would be falling ill like flies.

And that would be true in Canada as well. It can easily reach -25°C (-13°F) in my hometown of Toronto in winter, and obviously, homes are not being heated to 0°C. No one, as far as I know, has suffered from the “choc thermic” going from the extreme cold into a heated room. (If you are wondering, yes, aircon is everywhere in Toronto. Summers there are hot!)

Perhaps this used to be the case, but I think we can all agree that global warming on the rise. Even Meteo France advises that the frequency and intensity (link in french) of heatwaves are increasing and droughts are occurring more often. Nearly 15,000 French people died in the heatwave of 2003, so this is not one reason to take lightly.

I’m not a scientist, but this one does make sense. I do wonder though why only air-conditioning is subject to this and nothing else. Why not stop selling French airplanes (Airbus and Rafales), driving diesel cars, and or eating less meat?

Diesel cars actually receive tax credits in France, because many French automakers have continued to specialize in them, even though North Americans have moved away from diesel. The 2019 famous French Gilet Jaune (Yellow Vest) protests were due to an increase in car fuel tax. Because of course, no one wants to reduce their reliance on the car. (Maybe it’s because the car has air-conditioning!?)

The Difficulty of trying to keep cool

Just install air-conditioning you say, stop whinging and writing long articles about it! Unfortunately, it is not that easy. In a house, yes you can do what you want, but if you are living in an apartment in Paris, prepare for a fight. There are no heat and cooling ducts anywhere in French buildings, even in brand new ones.

Today’s French Building code includes requirements for fiber optic internet cables (invented in 1952 and popularized in the 1990s) but still no air-conditioning ducts (invented in 1902). Because apparently internet servers don’t cause global warming.

The lack of ductworks in buildings means that the locals don’t have the possibility of easily putting in air-conditioning even if they need to. To install the necessary ducts, you would have to drill giant holes through exterior walls, and more importantly, there needs to be a balcony or terrasse outside to place an evacuation unit to vent the hot air.

And you cannot just go around drilling holes in exterior walls. French bureaucracy is legendary, and this is no different. You must write to your syndic (building management), who will propose it during the annual vote of all the building residents. The other residents will then vote on whether or not you can install your air-conditioning. Their criteria for deciding:

I remember reading about one woman in Nice (south of France, so swelteringly hot) who installed an aircon unit without authorization from her building neighbors and so was ordered by the courts to remove the unit (link in french). You don’t want to install your aircon unit without express written permission to do.

Even office buildings are not guaranteed to have aircon. A friend who works in Finance at a French bank said that one summer their aircon was broken (!) and nobody got around to fixing it before the summer was over. I cannot imagine this happening in North America. If there is anything that will induce North Americans to strike, this is it. My French friend gave up wearing suits and went in polos. (I told him to look into Bermuda shorts as well!)

And if by chance there is air-conditioning in France, it is not always turned up to a comfortable level (see fear of thermic shock, fear of current of air, and desire to save money). Even the largest mall and movie theater in Paris, Quatre Temps in the expensive La Défense business district, has a “barely there” cooling policy, which is not very useful if you are looking for relief from the heatwave.

So you may have been able to guess by now, I am a child of air-conditioning. Yes, it is clearly a First-World problem, but I’m French now, and I have the right to complain. I’ve gotten used to many other things living in France, but this is one that absolutely drives me bonkers.

The attitude that “we don’t need air-conditioning” to me just smacks of Able-ism. Yes, most healthy people can make do without, but what about the more vulnerable? Small children, the elderly, the sick cannot regulate their body heat as well. I can tell you from experience that having 2 babies feeling sickly in a hot and humid apartment is no fun at all.

Every time there is a canicule coming, the French authorities (link in french) put out the usual advice:

The reality of summertime in Paris

So apparently I’m supposed to take the kids out of their non-airconditioned school, take the day off of work, and sit in the dark at home, doing nothing. While getting eaten alive by insects who have come in through those open windows.

Actually, I may not have to pull them out of school because many schools are closed when there is a heatwave because it is “not safe” for the students. (It is summertime in France, but for parents who work like me and my husband, the kids can go to their local school Centre de Loisirs (leisure center).

Our local Mairie (Town Hall) advises that the nearby library and swimming will be open this heatwave from 9am-8pm. That may be fine to take kids, but is that really where the sick and the elderly are supposed to get off their butts and go? What the heck are they supposed to do there for 10 hours, outside the comfort of their own homes?

Most French hospitals also don’t have airconditioning, so think about those poor patients who cannot simply get up and walk over to a window. My kids are born in winter, but imagine those unfortunate women in labor during a heatwave! Childbirth is hard enough as it is, why make it harder?

What People do when they can’t install air-conditioning

The mantra of “air-conditioning is bad” is quite vocal in France, with the holier-than-thou contingent of newspapers, government entities, and general Goody-Two-Shoes all chiming in. Anyone who dissents just ends up shutting up and secretly buying this: the Climatiseur Mobile.

Sales of mobile air-conditioning units explode around every heatwave (link in french), and yet no one wants to admit that maybe it is time to look for a better solution. Even local businesses and schools will keep a couple of units around because of how uncomfortable the heat is. Even the official residence of the President of France, the Palais de l’Elysée mobile airconditioning units, as you can see in the picture below.

Again, it is okay if you are able-bodied enough to transport your mobile aircon back and forth from your storage unit every summer and carry it up to your apartment (hope you have an elevator!). And then you have to install it.

Are the elderly and sick supposed to manage this themselves? What happens if they don’t have any family nearby? The French authorities set up a department for people to call and “check up” on the elderly (link in french) but they don’t come and do this. Thankfully all our older relatives have over the years, installed permanent aircon in their houses, so we don’t have to worry about them every summer.

☞ READ MORE: Checklist: Questions to ask before renting an Airbnb in Paris

So perhaps it is time for a better solution? We’ve already started on the “car problem” by inventing electric cars. A new hope may lie with scientists who have developed air-conditioning units that convert carbon dioxide into fuel, to reduce the global warming effect, rather than increase it.

France prides itself on its research and development abilities. I would think that it is time to move away from the one-size-fits-all “aircon is bad” speech and start leading in matters of innovation.

And a good first step would be thinking about installing cooling ducts in new buildings!

In the meanwhile, my advice to you if you are going to be in France this summer is to buy some nose plugs and a brumisateur. It is an aerosol can of water that you can spray on yourself and others during that smelly metro ride!

If you enjoyed that article, you may like to read my article on living in Paris (hint, it isn’t all it is cracked up to be!) 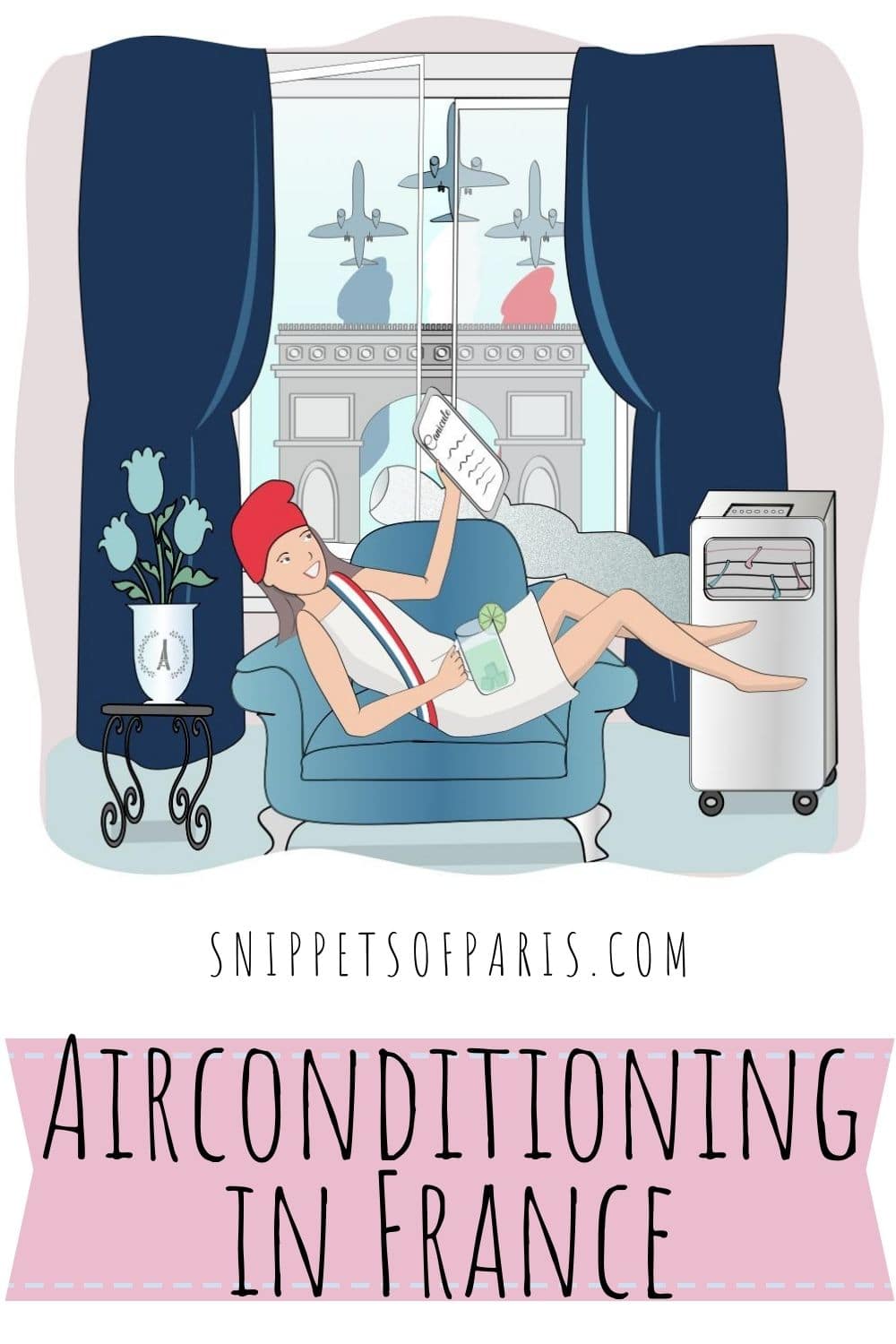 French Celebrations: All the official (and quirky) Holidays

The Laws of Driving in France: 27 Rules and Tips to know