Skip to content
With discounts up to 20-40% in shop!
Looking for some hardcore French insults that will get the blood racing? Get ready for a list of angry words in French that are sure to add fuel to the fire.
(As an Amazon affiliate, we may earn commissions for certain purchases. Please note, all information is provided for entertainment purposes only. See our disclosure policy for details.)

Warning, look away now if you are a sensitive soul. The following French insults are fighting words, and will definitely add fuel to the flames. Rated R, I advise you to proceed with caution!

French may be a beautiful language, but French people are not afraid to be unfriendly. Discussions can easily get into an argument, and then you have those that bring swearing into it. They are actually rather quick to get angry and tell people off, especially if you have broken one of their cultural taboos. So you shouldn’t be surprised that there are several ways to say “fuck you” in French. This is especially true in big cities and in road rage type incidents but really can occur anywhere.

And if you happen to be at a football game, such as Paris Saint Germain vs Olympique de Marseille, then you should really just walk away, unless you want to set off a riot! The general rule is don’t say it in French if you wouldn’t say it to someone in English.

Either way, while you may not want to the first to launch the F-bombs, you should at least understand what is being said. With that being said, here we go:

A very aggressive “Fuck you!” or “Up yours”. It is quite vulgar, with a sexual connotation, the same as in English.

Can be also said with the bras d’honneur gesture, which is to extend the left arm out up and out, with index and middle finger extended. With the right hand open, slap the left bicep just above the elbow while raising the left forearm up to 90 degrees.

Similar to the one above, this can also be said with the bras d’honneur (see below). This tends to be more popular in cities in the south of France, like in Marseille. Just yelling “enculer!” works as well, rather than the full sentence.

The bras d’honneur is not an expression but a strong insulting gesture. It involves banging a hand on the inside crease (elbow) of the other arm, which is folded upstanding the forearm with a clenched fist.

It can be combined with any of the other insults on the list and you can also add the middle finger for added emphasis.

Couilles literally means “balls”, so you can also say Couillon which means “little testicles”. The ultimate insult to a man, I suppose!

Pute means “whore”, so Fils de pute is “son of a whore”. To insult a woman, you can just use “pute”, by itself just as in English.

A rather mild one, meaning “dumbass”. The famous cartoon Lapins Crétin was translated into English as “Raving Rabbids”, so you can see it is rather mild.

The same as in English, Salope is used only for females. It is not unsimilar to Salopard, which means bastard, and is for men.

Connard is usually for men, and for women, you can use Connasse instead. (Even in insults you have to match and accord the adjective in French!)

Niquer is another way of saying “fuck”, and then they involve your mother with this expression.

You may notice with all these expressions that they are in the “tu” form and not the “vous”. Since “vous” is a sign of respect, it really doesn’t make sense to say “niquez votre mère“.

Another rather mild one, idiot would be used in the same context as in English.

This one is a bit more rare, but can still be used in an argument with someone.

Salaud can be used interchangably with Salopard (from above), which means bastard, and is usually for men.

One of the mildest ones on the list, which can even be said to children. “Arretes ça, t’es chiant!“, meaning “stop that, you are being annoying!”

Traditionally it is sac à Merde (literally “sack to shit”) which sounds a bit odd grammatically. More recently Sac de Merde (“sack of shit”) has become popular, including the name of a short movie.

This insult literally translates to “knot head”, but is much stronger than that. Screaming “Tête de noeud” at nearby cars while driving will qualify as road-rage.

Casse meaning “break”, and couilles meaning “balls”, you can guess that this is not the nicest thing to call someone.

“Ta Guele” translates to “your face”, and is a very impolite way of saying what is wrong with your face. A very popular insult in the daily French lexicon.

A very popular insult in France is “Casse-toi!” It literally translates to “break yourself”, but as you may be able to tell, is really telling someone off.

If you have watched Netflix’s Emily in Paris, you have heard this word before. Upon arriving at her new job in Paris, American Emily is referred to as a Plouc by her new French co-workers. (I can promise you French work culture is not that bad, you can find out more about working in France here.)

Not as rude as some of the others ways to swear at someone, this phrase literally translates to “go get yourself seen”. “Va te faire voir!“

This French insult literally translates to “go cook an egg”, but actually means “go away and stop bothering me”.

Basically, that guy who is always wanking off, he is a branleur. This is not one that you hear that often, but often enough to put it on the list.

“T’es vraiment un roi des cons, toi!” as in you are really a “King of the Idiots, you!” I’m not sure it translates to females however, “reine des cons” or “Queen of the Idiots” is not really an expression.

“Il n’a pas inventé l’eau chaude“, basically translates to “he didn’t invent hot water”, but effectively, it means “he is dumb”. The English equivalent would be “he is not the sharpest tool in the shed.” Other variations of this expression are:

In French, the verb rater means to miss out or lose out, as in “il a raté le bus“, meaning he missed the bus. In “Espèce de raté” however, you are calling some a “piece of a loss”, or rather a loser.

Fripouille in French refers to a dishonest person or a crook. I’ve also heard it teasingly used with a small child who is being naughty.

Another expression for youths is sale gosse!, but which is much more malevolent. Sale gosse meaning  “dirty/rotten kid” is often yelled out as an insult in France.

As far as French insults go, it doesn’t get much stronger than “lèche-cul” meaning “ass-licker”. (For a variation, there is also “trou du cul” meaning “asshole”. You decide whichever you prefer.

And finally, this insult is actually a favorite way to swear at someone here in France, and one you will hear (relatively) often. It is also very strong, so don’t just go about throwing it about: “Va te faire chier!“

As I said, you may escalate the quarrel instead of dampening it down, so handle with care.

Note, these are insults specifically aimed at an antagonist, If you are looking for more general swear words (as is “Putain, I dropped a hammer on my foot”), check out my post on the best French swear words here.

If you would like a free printable version to remember some of these insults, you can download that here. A bientôt! 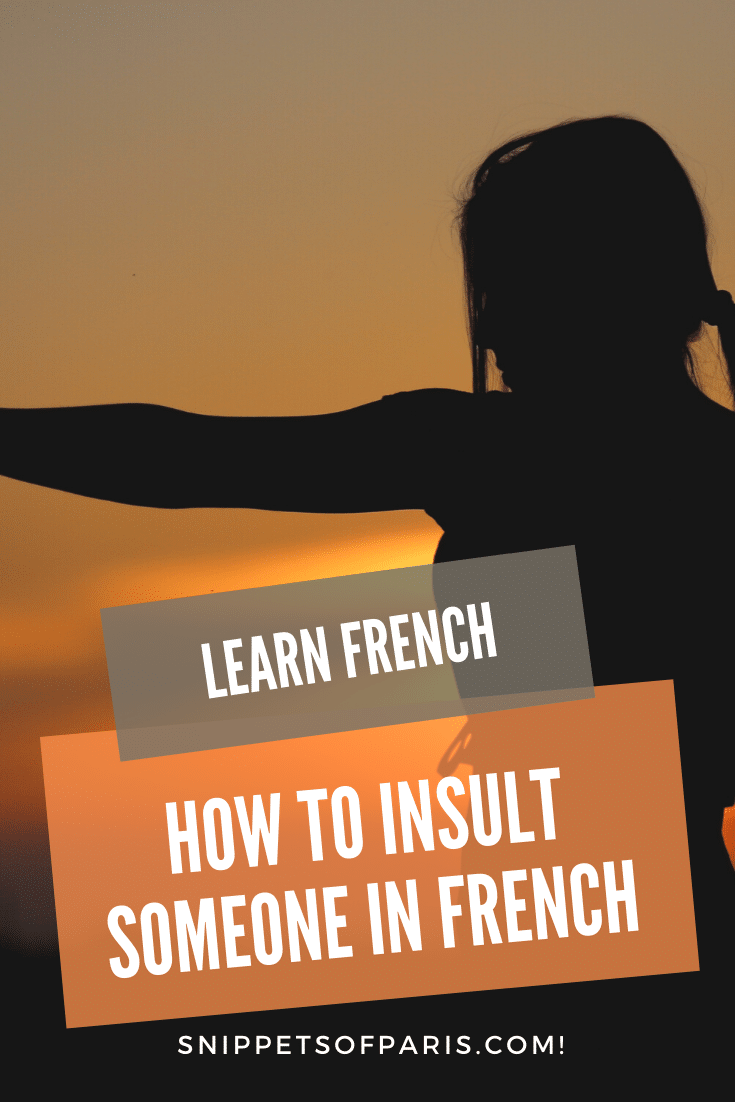 16 Funny Quotes about Britain and France

46 Funny and Famous Quotes about France

French for Kids: 11 Free Resources for learning at home