Skip to content
With discounts up to 20-40% in shop!
Find out about the history of Tuileries Palace and get to know its beautiful formal French gardens in the heart of Paris. 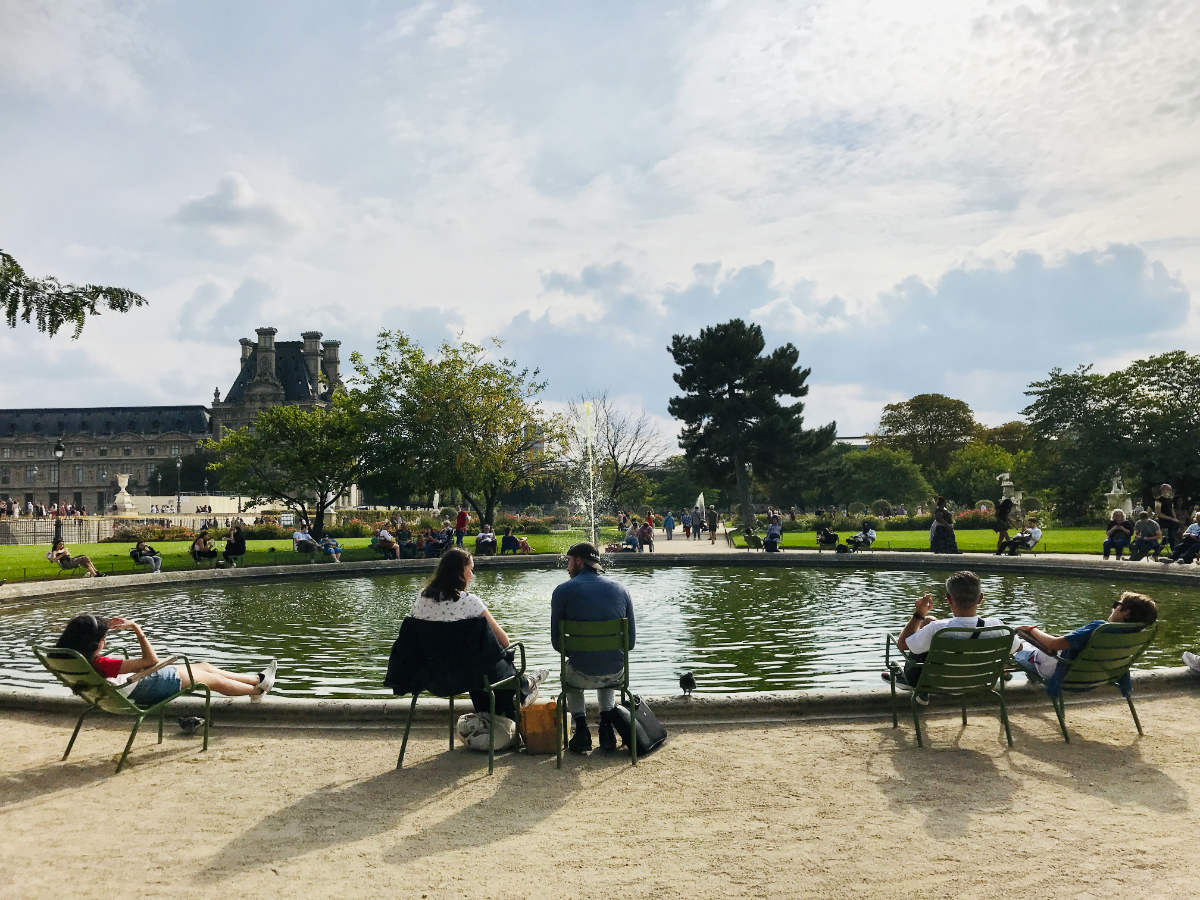 Right in the heart of Paris, in the 1st arrondissement is a beautiful garden known as the Jardin des Tuileries. As lovely as the garden is, the locals know that on this prime real estate in the center of the city, once stood a magnificent palace.

The Palais des Tuileries was a royal palace built during the Renaissance in the 16th century. It was meant to be a modern new palace with amenities far beyond the old Palais du Louvre and Palais de la Cité (Conciergerie) that already dated 300+ years.

This new Tuileries Palace would become one of the main royal residences of the French Royals in Paris. And yet today, there are not many remnants left of this amazing palace. So let’s see what happened to the unfortunately short-lived Palais des Tuileries, shall we? Allons-y!

Construction of a new Palace by Catherine de Medici

The idea for a new palace in Paris came not from a King, but a Queen. Queen Catherine de Medici embarked on the project after the death of her husband Henri II.

As an Italian noblewoman, without any royal blood, she had been married to the younger son of François I, and was never meant to be Queen. But she did come from the powerful Medici family, bringing with her plenty of wealth and knowledge.

And while her husband Henri II invested in renovating the existing Palais du Louvre, Catherine was interested in a fresh start, with a new palace right next door, the Palais des Tuileries. After his death, she began construction in 1564 using architect Philibert de l’Orme.

The name Tuileries comes from the tile kilns, which had previously occupied the site.

Expansion of the Tuileries Palace

Catherine’s son-in-law, King Henri IV, would continue to expand the Palais du Louvre and the Palais des Tuileries, with the intention of connecting the two.

At the time, the palace consisted of long, narrow buildings which were enlarged so that it could join the long gallery along the Seine river, the Grande Galerie. This Grande Galerie would run all the way to the older Louvre Palace in the east.

During the reign of Sun King Louis XIV, major changes were made to the Tuileries Palace. Initially as child, Louis lived across the street at the Palais Royal, but after reaching his majority, substantial works began at the Tuileries and the Louvre, including the addition of the Théâtre des Tuileries.

The king’s rooms were on the ground floor, facing toward the Louvre, and the queen’s on the floor above, overlooking the garden. At the same time, Louis’ gardener, André Le Nôtre, redesigned the Tuileries Garden.

The Sun King had bigger plans however. In 1672, he moved into his newly built palace outside of Paris, the Château de Versailles.

The Tuileries Palace was left empty and used only for its theatre. The gardens, on the other hand, became a fashionable hotspot for rich Parisians.

Marie-Antoinette and family during the French Revolution

The palace would continue to serve intermittently as a royal residence in Paris, but the new center of power for the Royal Court was the Château de Versailles.

It would take a revolution for the Tuileries Palace to find a new purpose. On July 14, 1789, the storming of the Bastille would occur, and soon King Louis XVI, Marie-Antoinette and their family were forced to return to Paris from Versailles.

They were held initially in the relative luxury of theTuileries Palace, while many of their courtiers moved into the Louvre next door to be on hand to serve.

The royal family tried several times to escape, with one particularly close call on 20 June 1791. But they were captured at Varennes and brought back to the Tuileries Palace. The following year, on 10 August 1792, the palace was stormed by an armed mob, who massacred the Swiss Guard that was in the service of the royal family.

Marie-Antoinette, her husband and children managed to escape, but eventually, the stalemate ended. Both King and Queen were sent to the guillotine after a short trial.

They lost their lives just yards away from the palace, at what is now Place de la Concorde, on the west end of the Tuileries gardens.

The Palais des Tuileries was not only near the Louvre museum, but in the center of the city, very close to some of the most famous sights in Paris.

It is in a direct line from Rue de Rivoli to the Place de la Bastille on the east, where the French Revolution started with the storming of the Bastille, at a distance of about 1.5 miles (2.5km).

In addition, on the west if you continue in a straight line on Rue de Rivoli for 1 mile (1.5km), you arrive at Place de la Concorde, which is where King Louis XVI and Marie-Antoinette were guillotined.

In later centuries, the Axe Historique was extended. If you go straight past Place de la Concorde (with a few meters deviation to follow the line of the Seine), you will head towards the Champs Elysées, Arc de Triomphe, and La Défense.

The National Convention and Assembly

In the aftermath of the revolution, the Tuileries accommodated the Constituent Assembly, its successor, the National Convention and, in 1795, the Conseil des Cinq-Cents.

These government functions were eventually moved to the Palais-Bourbon in 1798, in what is now called the Assemblée Nationale.

When Napoleon Bonaparte came into power in 1799, he made the Tuileries his official residence in Paris. He began constructing the northern gallery which also connected to the Louvre, enclosing a vast square (place).

Under Napoleon, the palace was redecorated in the neoclassical empire style by some of the best known architects and designers of the day.

After Napoleon was defeated, the restored Bourbon monarchy continued to make the Tuileries their royal residence.

During the July Revolution of 1830, the palace was attacked again by an armed mob to protest against King Charles X, a younger brother of the deposed Louis XVI.

This time the Swiss Guards stationed at the palace, aware of what had happened to their predecessors, decided to abandon the palace. There would be more intrusions and turmoil.

After another coup d’état in 1852 by Louis-Napoléon Bonaparte (the nephew of Napoleon Bonaparte who crowns himself Emperor Napoleon III), the Tuileries Palace once again served as the official residence of the executive branch of government.

Burning down the Palais des Tuileries

Like his uncle Napoleon Bonaparte, Emperor Napoleon III would also be defeated and dethroned after a battle in 1870, this time against the Prussians (Germans). He was exiled to England, leaving France in turmoil. His former home, the Tuileries Palace was finally burnt down during the Paris Commune protests in 1871.

Portions of attached Louvre were also destroyed, but were saved by the efforts of Paris firemen and museum employees. The Tuileries Palace however, was destroyed.

The ruins of the Tuileries palace stood in the center of Paris for 11 years. Although the roofs and the inside of the palace had been destroyed, the stone walls remained intact and restoration was possible.

Other monuments also set on fire during the Paris Commune, such as the Hotel de Ville and Palais Royal, were rebuilt. After much debate and hesitation, the République government decided not to restore the ruins of the Tuileries, which had become a symbol of royal excess. The demolition would be completed in 1883

The elaborate gardens at the Jardin des Tuileries have existed since the time of Catherine de Medici. Even in her day, the Tuileries garden was the largest and most beautiful garden in Paris at the time.

Catherine used it for lavish royal festivities honoring ambassadors from Queen Elizabeth I of England, as well as other occasions like wedding of her daughter.

In 1667, at the request of the famous writer, Charles Perrault, the Tuileries Garden was opened to the public. It was the first royal garden to be open to the public.

At one corner of the Tuileries garden stands the Musée de l’Orangerie and next to it the Galerie nationale du Jeu de Paume.

The Tuileries gardens remains open to the public today. It remains a park treasured by the locals living in the area, a place to stroll, go for jog, or just get some fresh air.

If you enjoyed that article, you may enjoy reading more about the history of Paris.

The Incredible History of Paris (with Timeline)

14 Places to go for the Best Shopping in Paris

14 Best Day Trips from Paris that you shouldn’t miss!