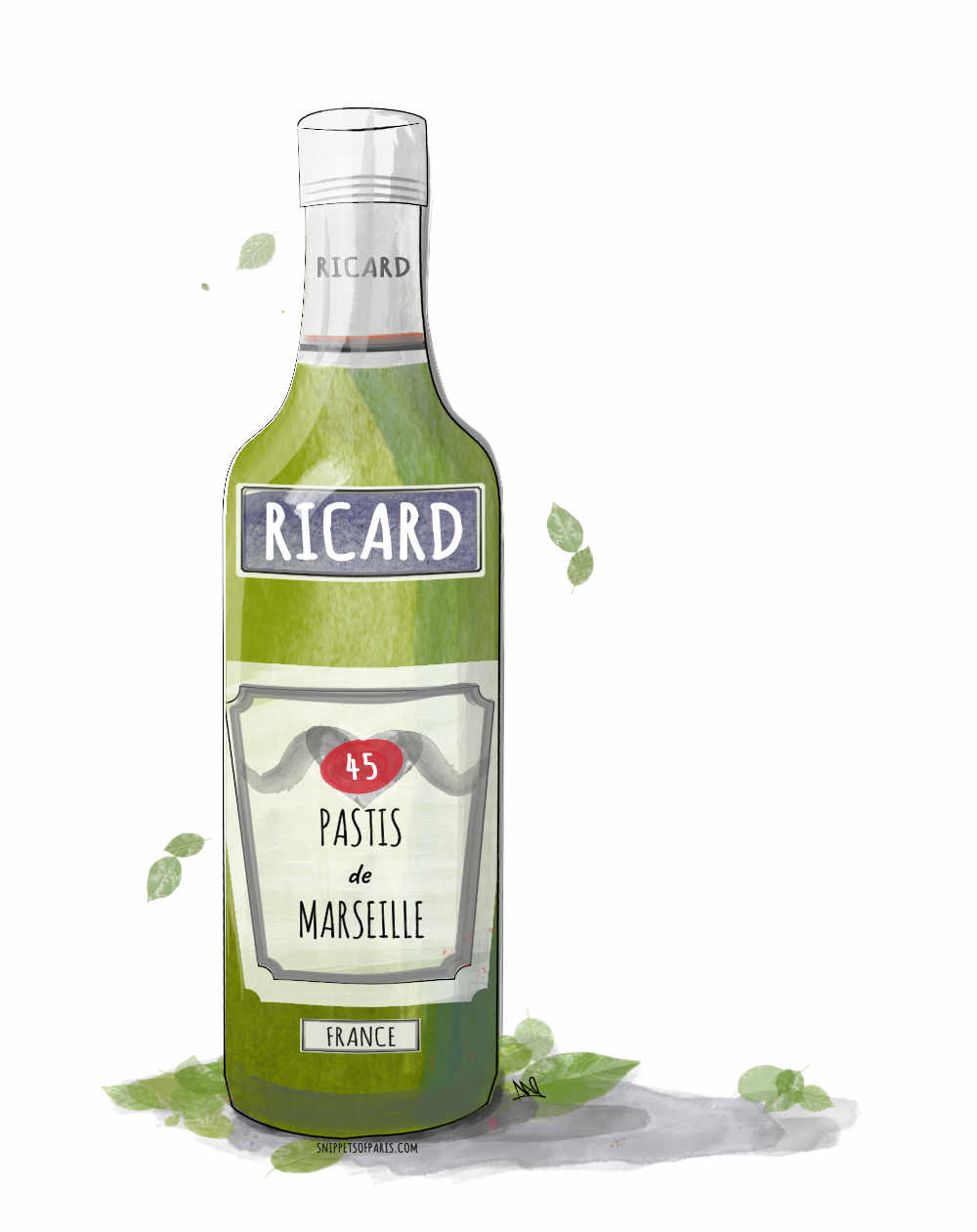 It is as French as the croissant. It was not de riguer when Napoleon was around, but if it were, I’m sure he would have drunk gallons of it for “Honneur et Patrie de la France“! Ok, maybe not but anyway, when our various French relatives come over, I do make sure I have 2-liter bottle handy.

And it is not because we’re from the South of France, where Pastis de Marseille originated (Allez OM!). Even if we weren’t “southerners”, I would still need to have it handy: Pastis is a French Institution.

Pastis first became massively popular in the 1930s at the same time when absinthe was prohibited in France. (Yes, absinthe used to be legal in France. Van Gogh didn’t just accidentally cut off his ear while in Arles in South of France, you know.) Pastis, with its alcohol strength at a mere 40% was considered safer. And its recipe is simple: just add water. A nice and cheap drink during the tough depression era.

Today you would be hard-pressed to find a restaurant or bar in France that didn’t serve it. And you can easily find Pastis in your local French grocery store or alcohol shop. French people apparently drink over 140m liters (link in French) of Pastis every year.

I have to state at this point that if you don’t like licorice, you won’t like Pastis. It is made from the anise seed, licorice root, and other herbs, but the overall taste is that of licorice.

It has an alcohol strength of 45% which you dilute with water, depending on how strong you want it and your preferred taste. (The normal dosage is 2cl of pastis for 10cl of ice-water. )

It is usually drunk as an aperitif, usually before a nice relaxing meal. It is quite similar to Ouzo from Greece, which makes sense because anise is a seed grown around the Mediterranean basin. Ouzo also is served ice-cold as an aperitif before the meal, but no water is added. (And no plates are smashed with Pastis.)

Ordering it at the bar

If you are at a restaurant in France, and you can’t find pastis on the menu, you can still ask the waiter for it. Unless you are at a Michelin star restaurant, it is probably that you missed it under “aperitifs”, while searching the general liquors or cocktails.

Once you’ve ordered, you will get a tall glass with just the alcohol in it. Don’t panic, the waiter will bring it over with a carafe of water, and some ice cubes. It will be up to you to mix it to how strong you want your drink to be, depending on how much of a tippler you are. It is 45% alcohol, so forewarned!

Pour the water into the glass and add the ice cubes. The liquid will turn into a cloudy yellow color, and voila, it is ready to drink. You can pair it with some olives, nuts or chips, as the perfect pre-dinner apéritif.

Where to buy Pastis outside of France

Despite its popularity in France, it is almost completely unknown outside France. I was able to locate it on amazon.com, only to see that the seller is shipping it from France.

So why the reticence? The company with the largest market share, Pernod Ricard, also owns other international brands such as Absolut Vodka, Ballantine’s Whiskey, Malibu Tequila, Havana Club Rum and many many more. So they have the firepower to market Pastis in overseas. Is it just not adapted to the anglophone palate?

Personally, I find it refreshingly light, with the benefit that there is also no added sugar. It is a pretty decent thirst quencher on a warm sunny day.

And for those watching their weight, a glass of Pastis is only about 84kcal, about half of what the same size soda can would be. The next diet trend in New York perhaps?

So try a glass of pastis, the next time you are in France. And if you love it enough to become a connoisseur, you will just have to stock up at the duty-free and take it back with you!

Your guide to a traditional French Christmas

French Dining Etiquette – The Cheatsheet of Do’s and Don’ts