Skip to content
With discounts up to 20-40% in shop!
French people don't do baby showers or birth announcements. And parents putting photos of their children on facebook? Just say Non!
(As an Amazon affiliate, we may earn commissions for certain purchases. Please note, all information is provided for entertainment purposes only. See our disclosure policy for details.)

This topic has been swirling around for some time, until last week it all came to a head. I was offered the chance for a feature on another site; the catch was they wanted a picture of me with my kids.

If you’ve been reading the blog for a while or are following on social media, you will know that I don’t put photos of children online. I may draw pictures of children, but there are no photos of my own kids.

Not that there is anything that special about their baby photos. I think they’re cute, but I’m sure everyone else will just yawn. But I do think they should be making decisions about their own privacy when they are older.

And amongst French parents, friends, and colleagues, I’m not unusual. Rarely do I see a back of a child’s head on Facebook or Instagram. More common, if you were only relying on social media, you may not even know that the person has a child!

It all begins at birth in France. Or more precisely, it doesn’t. If you have read the article on having a baby in France, you have heard that French parents don’t really do baby showers or gender-reveal parties, or any other birth-related extravaganza.

Actually, they rarely do facebook birth announcements either. Amongst our French group of friends, there is maybe a 1 out of 5 chance (non-statistically calculated!) that someone will announce they are pregnant on facebook, and maybe a 1 out of 4 chance of an announcement that a baby has been born.

So why the French reticence? Hootsuite and the Digital Marketing Institute reported that on average, French people spend 40% less time on Facebook than in the U.S. And when they do, the Pew Research Center notes that it is usually for a news source, not socializing.

This is in line with my personal experience on Facebook. I find that my French network (with or without children) tends to share less on social media in general. There are rarely photos of what they did on vacation, or how they celebrated their birthday. Once in a while, there may be a news article or info about a new event they are attending in Paris, but that is it.

The general idea is that if you don’t speak to the person often enough to know what is going on in their lives, then you don’t need to know what they are doing on holiday either via Facebook.

But that is not to say that there aren’t French parents who post their children’s pictures. I follow several French influencers who have pictures of their kids on Instagram. But this does tend to be on the rare side, rather than the norm.

There is a combination of factors, of course, and each person judges for themselves the level of privacy they want to maintain. But in Paris, there are several reasons to maintain a bit of privacy:

The idea of “showing off” is strong in France. You will see less fancy cars on the streets of Paris (link in French) than other capitals. It is considered rude to speak about “money”.

So posting pictures from your 3-week holiday on your fantastic trip to Japan may be showing off, since it shows that you have a certain amount of money to be able to afford that.

Remember, France is the land of the revolution, where the elite Marie Antoinette and her King had their heads chopped off for being too extravagant. Today, protests like the Gilet Jaune movement were about the “elite” raising taxes, which is why the symbol of wealth, the Champs Elysées is a target.

☞ READ MORE: Strikes in France: Should everyone protest like the French?

Petty crime and looting are high in France (link in French), so you likely don’t want to announce you are going on holiday, and have someone break into your home.

People have multiple locks on their doors, with keys that are much more complex than the ones we use in North America. (Now when I go back and watch HGTV, I’m always baffled by those homes in the U.S. that have a glass door, where anybody can see it and break in!)

The French government of course also has an opinion on this. According to the law, while it is not illegal to publish photos of your kids, both parents have to approve.

But more interestingly, according to the law (Article 226-1 of the Code pénal, if you must know), says that if you as a parent post a picture of your child, and your child later opposes it, they can sue you. “A photo posted of a person, without their consent, has a penalty of up to 1-year imprisonment and a €45000 fine.”

This means that if your French child grows up, and dislikes seeing photos of herself all over the internet, she can sue you. How about them apples!

Europeans, in general, take a stronger view on privacy, and new GDPR laws came into effect in May 2018 about the “right to be forgotten”. Large corporations collect enough data on us anyway, so why give them more with photos of our children? What exactly are they doing with them?

Considering that most of these companies, Google, Facebook, etc are not French, most people tend to keep at arms’ length.

In the early days of Instagram (many moons ago!), I assumed that it was merely a program to add pretty filters. So you can imagine my surprise when I realized that it was actually defaulting to “public”. My mistake, I’ll admit it.

Facebook (which controls IG as well), has strengthened the privacy controls on Facebook, to avoid the default being “public”, but there is still a huge hole. There are basically 3 options: Only me, Friends, and Public.

And there’s that little asterisk which says that “Friends of Friends” can also view what you publish.

The number of children I see in my newsfeed who I don’t know, and I don’t know their parents, is shocking. A group of kids go to a birthday party, and one parent tags all the other parents in the photo. Well, that photo has just been broadcast to large number of random people who don’t know all those children.

Granted that 99% of people don’t care, and will scroll past as I do. But why is it up to each parent to police who else is on their friends’ friend list?

In France, certainly amongst my circle, we may get together and take a photo and put it on Facebook, but everyone knows better than to include a picture of the children.

Have we become paranoid?

So how do French people discuss such exciting activities as their child’s birth, or their kid’s latest Halloween costume? It may be rather old-fashioned, but in person actually. Because I rarely see on social media how my friends’ children are doing, I tend to always ask.

But I will be the first to confess, having personally moved around a lot, I enjoy seeing how my friends overseas and their kids are doing. With busy schedules at work and at home, who has time for long phone calls and personal emails to get one on one details? It is so much simpler to scroll through Facebook.

And perhaps to a certain extent, French parents have all “infected” one another. Legal issues aside, because nobody publishes their photos online, no one wants to be the first to start.

So in case you were wondering, I turned down that article feature. But I’d like to hear your opinion, do you publish family pictures on social media? Have I changed your mind, one way or the other?

If you enjoyed this article, you may like to read more about other aspects of French culture that are different from North America. (Hint: there may be a few surprises on the list.) 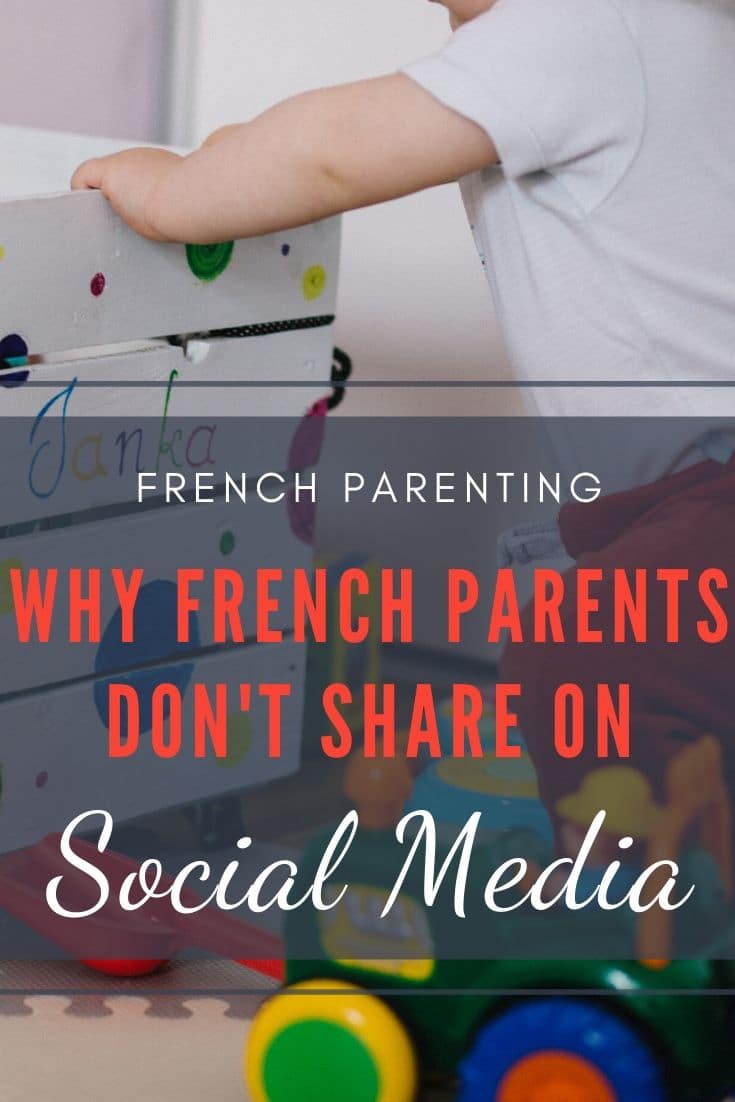 New job in France? A Guide to the Médecin de Travail

21 Facts about Marie-Antoinette: Did she say “Let them eat cake”?