Skip to content
With discounts up to 20-40% in shop!
Do French kids eat everything? Not really. But the trick that French parents seem to know, is how to push their picky eaters to try. Do French kids eat everything? My toddlers would lose their citizenship if this was the case. It is a given, children all over the world hate what they don’t know. The trick for French parents is how to push those picky eaters past that stage.

At the risk of sounding sanctimonious (yikes!), I will say that while my kids have their picky moments, we are now at the point where about 90% of the meals we make, we can all eat together. And we don’t do finger food, special plates with dividers so the food doesn’t touch, or other parental contortions to keep the kids from screaming their heads off.

As an example, we’ve recently come back from holidays with relatives, where I left their food menus entirely to the person whose house we happened to be at. During that time my kids mostly ate everything put in front of them, from foie gras to smoked salmon, to zucchinis, and more. They are clearly earning their stripes as little frenchies.

This progress has not been overnight. My kids are not little eating savants or anything (I wish!). It has been a gradual process and continues daily, even for myself.

For one, I am never going to present my kids with such french delicacies as the boudin noir from Normandy (meaning “blood sausage”) or les tripes de boeuf from Lyon (meaning “beef guts”).

This can be their French Mamie‘s (grandma’s) job! But I do want them to be able to at least try a couple of spoonfuls before they decide if they like it or not.

The Role of Education in Healthy Eating

It is interesting to note that one of the most important things that we have to deal with on a daily basis as children and adults is eating. And yet it is a subject very rarely taught in school in North America.

French kids learn about different foods and meals starting in preschool in their classrooms. Lunchtime at school is also considered a moment to teach kids. Kids as young as 3 are taught to recognize different foods, eat properly, clean up after themselves, and generally be civilized while eating.

By the time they are 4, they are allowed to eat without a bib at school, knowing that they won’t make a mess. They carry their own trays and are even given little knives to cut their own food.

I found myself “behind” at home in what I thought my kids could do, compared to what they were already managing at school. (They grow up too fast, these little ones!)

But with all that said, even if your kids are not in a French school, here are some simple things that everyone can try at home. Allons-y!

1. French Parents don’t try to hide the taste of vegetables

It all starts as a baby. I was told that in the past (before lactating and wet-nursing was widely recommended), French parents were encouraged to boil vegetables and use the flavored water to prepare the baby’s milk formula. The idea was to introduce the taste of the vegetables as soon as possible.

Even today, French baby food that you get in stores is the puréed version of adult french meals such as:

On the other hand, when you look at baby food in the U.S., the idea is that the taste of the vegetables is hidden by sugary fruit. Here is an example where the beetroot is overwhelmed by the orange and chocolate. How is that child ever going to know what beetroot tastes like?

Probably one of the main reasons that French kids eat everything is that by mealtime they are hungry. Not starving, just normally hungry. The main meals for a child are:

I wrote an entire article on the goutêr because it is such a fixture in the routine of a children here. Most of the time it is sugary stuff that is not the healthiest: a pain au chocolat, a piece of cake or another small pastry, with milk or water.

All this means is that when mealtime comes around, they are actually ready to eat.

3. Kids are served their veggies before the yummy stuff

To make sure the good stuff goes into the belly, the veggies are usually served first at dinner. If you have read my article on how a typical French meal is served, you will remember each dish is actually brought out separately. No thanksgiving-style full table presentation in France.

This makes it easier to tell the kids that the sausages are coming, if only they eat their green beans first.

Parents everywhere never have enough time. French parents (or at least Parisians) work long hours just like parents in North America. Nobody has time to go around cooking different meals for each person.

I will say that French school canteens help a lot with this. No hotdogs or pizza here. Instead, our preschool is serving items like:

This is food that adults would willingly eat. And it makes it a lot easier if they see Maman and Papa eating the same food as them (which they can see is not going to hurt them!).

Fruits and vegetables that are in season usually taste better than that which has been chemically “encouraged” to grow. If a tomato actually tastes like a tomato, sweet and juicy, the kids are more willing to eat it. (This is the theory anyway. See #10 & 11 below.)

With French parents taking fresh food so seriously, school menus are a political matter. I get an email once a month from our local Mayor’s office of what is on the menu that month. And they duly inform le that all the food in the canteen is cooked every day on-site, using fresh ingredients and organic produce. Here is a sample menu, where everything in green is organic.

6. French children are asked how much food they want

Ever three-nager likes to make their own choices. Asking them “how hungry they are” gets them involved in the decision making of what they put in their stomachs. They may want a lot of meatballs, but they know that they will get a good serving of broccoli as well.

At school as well, 3-year-olds are asked if they have a “gros faim” or “petit faim“. (This also helps cut down on wasted food. Win!)

I’ll admit this one is not my favorite, but it does work. French food generally doesn’t involve a lot of spices. Nothing is overly tangy, sour, or spicy. A tiny bit of salt, pepper, garlic, and herbs like basil, oregano, and parsley tend to be as dominant as it gets.

This works well for children. Infants start with 30,000 taste buds which disappear by 2/3rds by the time they reach adulthood. So strong flavors that taste fine to adults, taste overwhelming to small children, which makes them not want to eat.

8. No sodas, pop drinks or juices during the meal

There is no chance of filling up on sugary liquids instead of a proper dinner if all you are offered is water. Adults can have wine, but that is it. Even outside of mealtimes, these sugary drinks are banned.

9. No dessert if they don’t try the veggies

My 3-year-old picky eater pointed this out to me actually. At preschool, they don’t get dessert if they don’t at least try everything. A good rule, because French kids are used to eating some sort of dessert (yogurt, cake, chocolate, etc) at the end of every meal.

10. French parents don’t try to force their kids to eat

Mealtime is not meant to be a war zone. If your picky eater refuses, you can either let it go, or you can keep trying to insist. It is difficult to let a small child to walk away, knowing that any way they are going to wake up in the middle of the night hungry.

But as the French saying goes, a baby is not going to let himself starve. If they are hungry, they are going to ask for food. I confess I do keep on hand some frozen vegetable purée to serve if my picky eater turns too picky.

11. Everyone eats weekend meals all together

Most Parisian parents I know tend to eat late (around 8pm), so it is difficult to eat all together. But on weekends, all bets are off. A proper meal at the dining table is what is required. A moment to chat about the week, and enjoy each other.

12. Meals are usually over an hour-long

When I say a moment, I mean an hour or more. Typically lunch or dinner with the extended family can go on for 2+ hours. (And Christmas is a 3+ hour marathon.)

I usually let the kids get up and play after they have finished. As I said before, mealtime is not meant to be a warzone.

13. French kids don’t have to finish their meal

And with that, as long as they’ve eaten a decent portion of everything, no one has to finish their plate. I can tell with my own kids if they are full, or if they are actually just being picky. We all have to pick our battles.

(Note: French Adults on the other hand do have to finish their meals! You can read more on French dining etiquette here.)

14. French parents present the same food over and over again

If at first you don’t succeed, try again! At our nursery, we were told by the nurse in charge of the nutrition that kids need to see food around 15-20 before they become used to it.

For instance, I had one kid who refused to eat peas by themselves but would happily eat them in a paella. It took ages for her to figure out that they were the same peas!

So with all that, keep trying Mom and Dad. You are doing a great job! A bientôt ! 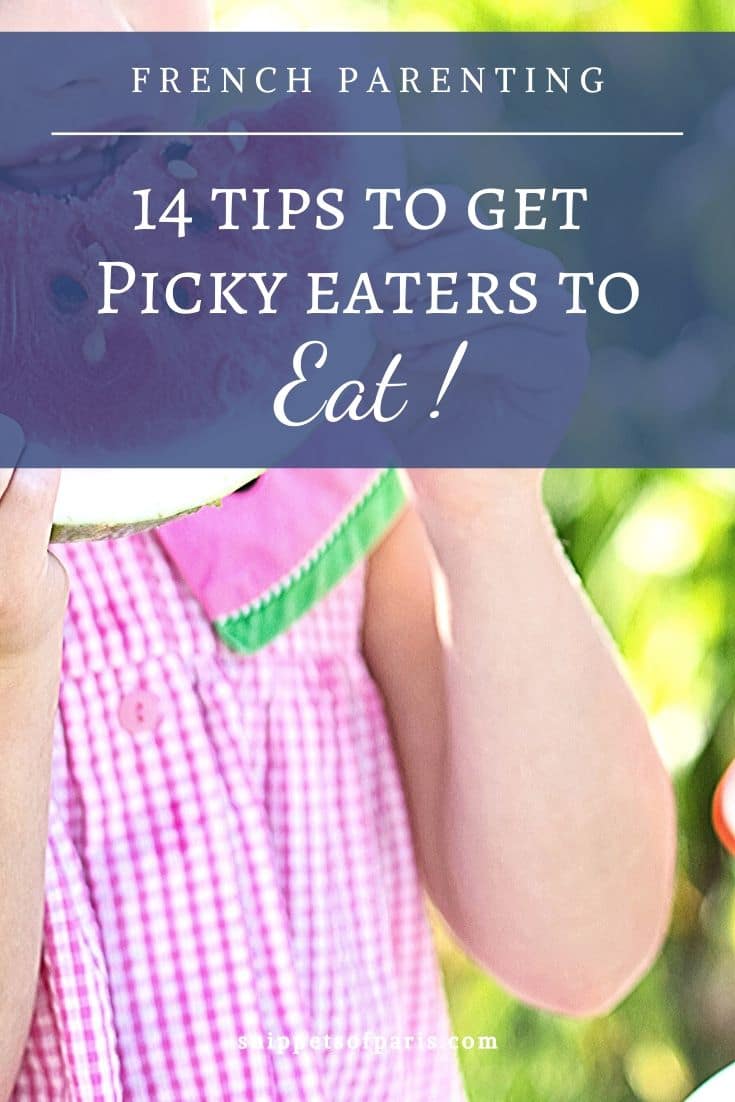 11 Burgundy Foods: What to eat and drink in Bourgogne