Skip to content
With discounts up to 20-40% in shop!
Tags: plus beaux village de france
Travel to Les Baux-de-Provence and Carrières de Lumières in the south of France. From art exhibitions to medieval châteaux, we look at what to do in the area, what to eat, and more. 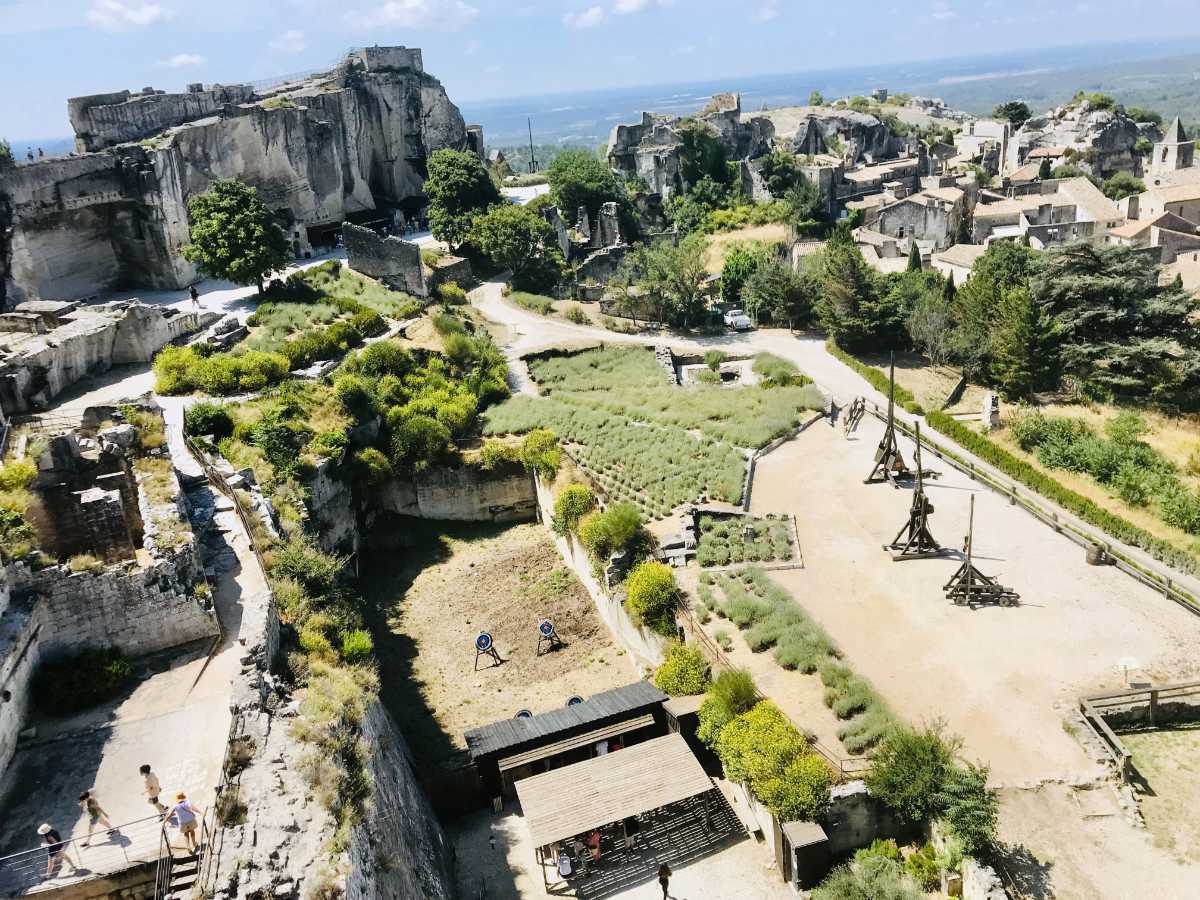 Les Baux de Provence has been named one of the “plus beaux villages de France” and it is not hard to see why. Even before the famed art exhibition, Carrières de Lumières, set up nearby in 2011, the soaring château ramparts and the village perched on a hill looked like it belonged to a different time.

And with modern inventions like the car banished to its outskirts, Les Baux-de-Provence looks to remain that way.

This historic little village has been occupied since prehistoric times. Some historians theorize that the first people to inhabit the site were over 6,000 years ago.

Interestingly, the Baux-de-Provence actually has a lord, the Prince of nearby Monaco. In 1642 the town was offered to the Grimaldi family as a marquisate. The title Marquis of Baux is still today carried by the Prince of Monaco, which is about 160 miles (260km) away.

Administratively, the town is entirely French and the title of Marquis of Baux is just a figurative title, especially after the 1789 French Revolution when titles were banished.

The town gets over 1.5 million visitors per year although it has only 22 residents in the upper part of the commune and less than 500 people in the whole commune.

This part of Provence is best known for its lavender fields, which are in full bloom in June, and has become synonymous with warm climate, sunny vineyards and fresh food.

Not to mention its beautifully preserved medieval villages like Baux-de-Provence. So let’s see what are the best things to do in the area, shall we? Allons-y!

A few hundred meters (5 minute walk) from the village of Baux-de-Provence is the Carrières de Lumières. Located in ancient quarries that were used to dig out limestone for construction, it has been taken over by a digital art studio.

The art exhibition projects the imagery of famous artists like Picasso and Van Gogh on these centuries old walls, of what is classified as a “Site naturel classé” (listed natural site).

The exhibition regularly changes the famous artists and paintings it showcases, with many of them being French or having lived in France, and specifically Provence. (For instance Van Gogh was Dutch, but spent many of his working years in nearby Arles and Paris.)

This popular destination attracts visitors and tourists from all over Provence, costing around €14 per entry. The exhibition recommends that you bring a light sweater or jacket when visiting because it does get cooler inside, even in the height of summer.

There are tours that go to Carrières des Lumières from nearby Avignon, so if you don’t want to drive yourself, this could be a good option.

Uphill from the village, you will find the impressively large Château des Baux. It is this location, with wide expansive views of Provence (and possible incoming armies) that have made Baux-de-Provence so attractive.

Built in the 10th century, this defensive fortress became a feudal stronghold in the middle ages, with many local counts and the French monarchs struggling to control the area.

After continuing battles and sieges during which different rebels claimed the fortress against the French crown, the locals came up with a plan to put an end to it.

In 1631, the people of Baux-le-Provence negotiated with the King Louis XIII for the right to dismantle the fortifications, “which were a refuge for rebels”, so that the castle stronghold could no longer be used to stage rebellions.

Today, some of the walls and towers are still standing, and there are exhibitions inside detailing the history of the château and its occupants. There are also shows in the summertime, with actors demonstrating the catapults and other weaponry that was used to fight all those medieval wars.

Entrance to the Château de Baux costs between €8-10/adult depending on if it is peak season or not.

The village of Les Baux de Provence is entirely pedestrianized, with large parking lots in the outskirts for visitors to leave their cars. There is one main entrance into the village, along the village ramparts, where inside you will see plenty of little shops, boutiques, and cafés.

It does get quite busy if you are visiting in summer, so if you are having lunch there, you may want to make reservations early.

Also, if does get quite hot in the summer (and there is no air-conditioning even in restaurants), so aim to get there earlier in the day, so that you can go to the cooler Carrières des Lumières in the afternoons when it is warmer.

In Place Louis Jou in the village, you will find the Musée des Santons. Santons de Noël are small figurines placed in crèches, which is a typical Provençal French Christmas tradition.

While most crèches (nativity scenes) usually only feature the Baby Jesus, Mary, Joseph, and the animals, in Provence, they feature the whole village!

All sorts of folks from the typical French village, such as the butcher, milkman, postal worker, etc will be featured in the nativity scene as porcelain figurines.

The Musée des Santons, which offers free entry, has all sorts of figurines on display featuring the best of small-town Provence.

Walking through Les Baux-de-Provence, you will notice many of the specialities of Provence available for sale.

You will also find various products made from truffles like oils and tartines. Keep an eye out for the black diamond truffle, you’re lucky enough to find it, as well as other flavors and local delicacies.

You can also find calissons from nearby Aix-en-Provence and local wines from the Côtes-du-Rhône.

How to get to Baux de Provence?

It takes around 6h45 minutes to get to Baux de Provence from Paris by car. The closest airport is in Marseille which is about 1 hour drive away.
If you are coming from Paris, you can take the TGV high-speed train from Paris to Avignon which takes around 3h and then drive around 30 minutes to the village.
You can also take a tour from Avignon to Baux de Provence and the best of Provence, to see it all in style. 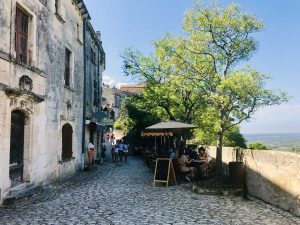 Baux de Provence has a lot of narrow cobblestone streets some of which go uphill. Given the age of the village, it is not the most stroller or wheel-chair friendly.

You likely only need a day in Baux de Provence, but you may decide to base yourself here to visit all the other small villages and towns of Provence like Roussillon, St. Rémy de Provence, Arles, Avignon, Nimes, Uzès, etc.

If you enjoyed that article, you may enjoy reading more about visiting Provence.

Saint Tropez: 11 Things to do (other than yachting)

Visiting Nice: Top Things to do along the French Riviera