Skip to content
With discounts up to 20-40% in shop!
With its charming cathedral, towering castle and the Côte d'Opale, Boulogne-sur-Mer is the perfect getaway in Northern France. With a list of best things to do in the area, where to stay, and much more.
City center with Cathedral in the distance - Photo by Danik Bates
(As an Amazon affiliate, we may earn commissions for certain purchases. Please note, all information is provided for entertainment purposes only. See our disclosure policy for details.)

It is a hilltop town overlooking the La Manche (English Channel), that is best known for its fishing and seafood. For centuries it has been on the front line in the wars between France and England. With plenty of things to see and sights to visit, we explore Boulogne sur Mer on the road to Calais in France.

Boulogne-sur-Mer started out as a settlement for a local Gaelic tribe before the Romans conquered the area and started laying the foundations of the town. Once the Romans were gone, the English and French armies came fighting a lot for the land in Northern France which included Boulogne and nearby Calais.

The town hosted an important royal wedding in 1308, that of Edward II of England and Isabelle of France, the daughter of French King Philippe de Bel, in an attempt to reconcile French and English relations. (It didn’t work, they still argued.)

Eventually, peace came to the area until Napoleon came to power. He improved the defensive fortifications and gathered his grande armée in the town as he prepared to conquer England. His attempt failed, defeated by Nelson and the British Royal Navy in the Battle of Trafalgar at sea.

The town became peaceful once again until the First and Second World Wars where Boulogne got the brunt of the damage. It was heavily bombed during the Battle of Britain, a battle that took place over the sea and damaged a lot of Dover, Folkestone, Calais, and Boulogne.

After the war, the town was rebuilt, though much of the old historic center remained intact.

The Notre-Dame cathedral, whose dome can be seen for miles around is one of the major landmarks of the city. Explore every room as there are some nice artworks on display and the dome is quite impressive. Also, pay a small fee to check out the crypt and see some amazing artwork as well as some spooky tombs.

Walking along the cobbled streets of the upper town and check out the Chateau-Musée. Its defensive walls are worth walking on top in the summer months as they have some great sea views. On a clear day visitors may even see England!

3) Rent a bike along the Côte d’Opale

If you are into cycling and want to do some sightseeing at the same time, rent a bike and cycle north along the Côte d’Opale. There are beautiful seaside villages along the coast, with some great seafood restaurants, as well as wide golden beaches and a few museums from the World wars.

Boulogne-Sur-Mer also includes one of Europe’s largest aquariums, called Nausica. There are over 1600 species housed in the aquarium over 15km (9.3 miles). Impressive indeed!

There are also two major exhibitions, the Journey on the High Seas and Mankind and Shores, along with animations like the Sea Lion’s Medical Training, The Finding of the Penguins, Meet the Nausicaa caretakers, and more.

It tends to be quite busy, especially during school holidays, so purchase your tickets in advance here.

If you enjoy going to the beach, you will enjoy the one at Boulogne sur Mer. It is a large expansive stretch of white sand, with a lovely promenade along the sea. The beach is just beside Nausica Aquarium, and there are all lots of shops and beach huts around as well.
Don’t forget to visit the San Martin monument and the Shaking Hands monument.

Being a maritime town, there is a lot of international influence on food here. Apart from seafood, the main meal is Welsh Rarebit (similar to a Croque Monsieur) which is served with a savory sauce of melted cheese and various other ingredients.

How to get to Boulogne-sur-Mer?

Boulogne-sur-Mer is located in the Hauts-de-France region and is under a three-hour drive north of Paris. Also, there are trains a few times a day from Paris via Arras or Lille to reach the seaside town.

☞ READ MORE: Things to know before driving in France

One night is probably enough, counting time to arrive and a late departure the next day. Here are some accommodation options that there are in the village.

For me, apart from all the sightseeing, I recommend having a seafood course in a restaurant in the Upper town. And if you are into shopping, check out the street market which is on in the Lower town on weekends. One of the best I have been to in Northern France. 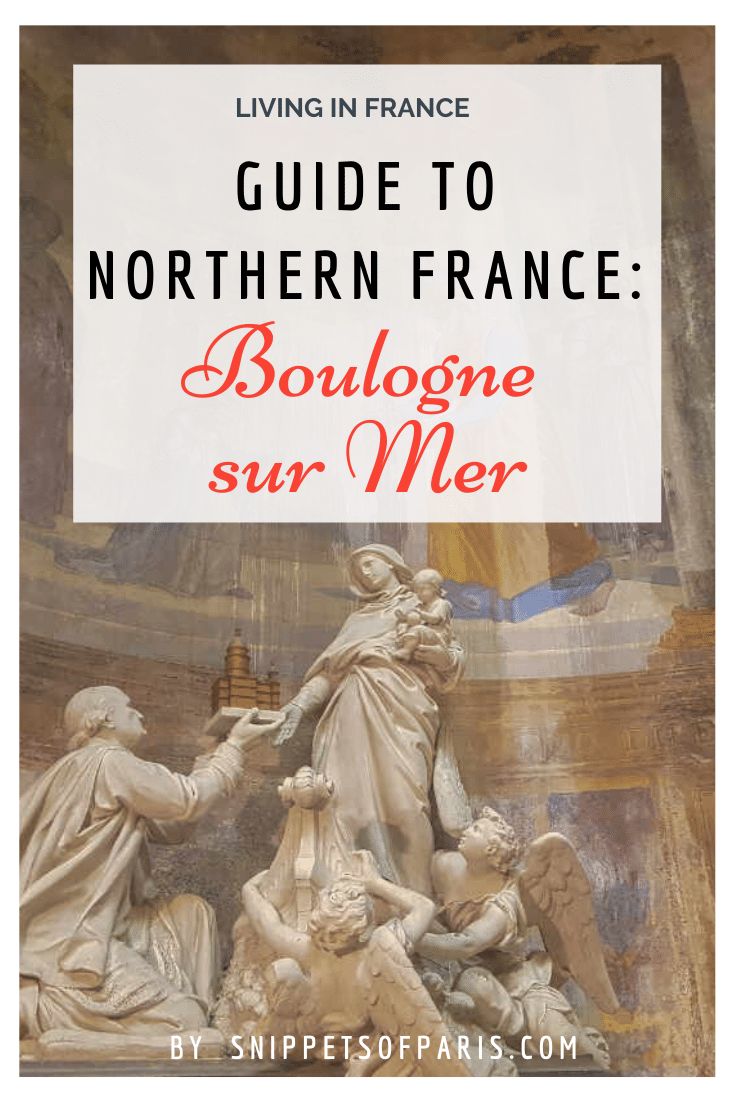 Visiting Montpellier: The Refined city on the French Riviera

France in Winter: 10 Places to Visit when it is cold (Brr!)