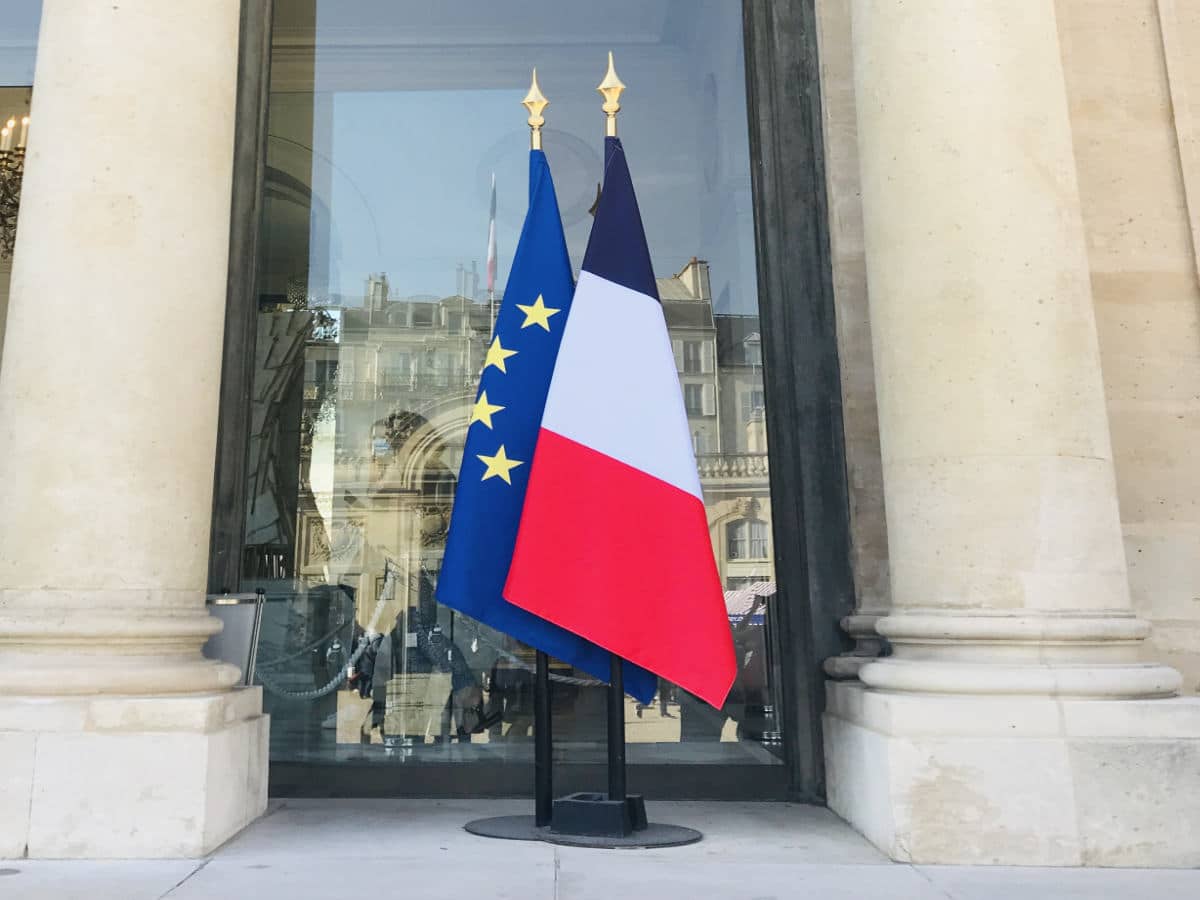 What is your favorite hue of blue? That is the question that French people having been asking themselves this week, when one intrepid reporter noticed that French President Macron appears to have changed the color of the French flag:

Apparently he did so sometime last year, however no one noticed until just now. Sacrilege! What would General de Gaulle say?!

Well actually, it appears that De Gaulle would approve because the dark navy blue that Macron changed the flag to was the original one after the French Revolution.

The brighter blue was brought on in the 1970s after De Gaulle was already dead (and before Macron was born) by French President Giscard d’Estaing. At the time it was done so discreetly to match the brighter blue of the European Union flag and simply to look better and more coordinated on TV.

All of which has resulted in both French commentators on the left and right completely baffled. Should they protest this “upstart who changed the French flag” or “celebrate” the current president for bringing it back!??

Like most countries, French people only like their politicians once they are dead and/or out of office, and with President Giscard d’Estaing already dead there is actually no one else left to blame for this flag brouhaha.

Moving on from the flag debate, there was a bit of a flooding issue in Paris on this past Monday evening. The Canal Saint Martin that runs from the north of Paris to the Seine river had a technical problem with its canal locks and decided to flood:

Watching the video, your first question might be how cars are still being allowed to drive along the canal? (I’m sure that was your first question.) As you may have heard, Paris Mayor Anne Hidalgo is trying to ban cars from the center of Paris, and everyone from the New York Times to EcoWatch has something to say about it.

Now, Hidalgo may be succeeding in banning cars in Paris but she is having a harder time winning over country-wide votes as a candidate in the French presidential elections, polling around a mere 5-7%. (She is a candidate for the Parti Socialistes, aka the party undone by former President François Hollande’s “I’m going to raise taxes to 75%” which he declared in 2012 but is still not quite forgotten.)

Even French TV personality Stephen Bern (who is best known for his documentaries on the Royal families of Europe and has somehow finagled the Order of the British Empire) declared over the weekend that “Paris est devenue une poubelle”, meaning “Paris has become a garbage dump”.

Bern declared that he wasn’t targeting Hidalgo, but she has been mayor and deputy mayor for over 20 years, so it is hard to see who else he could be targeting. He was also appointed to a position in National Heritage under President Macron, so not exactly an unbiased opinion. (Bern made the claim while announcing that he is moving to his château in the countryside. La di da! )

At the same time as #saccageparis (meaning “garbage paris”) is trending on Twitter, news has come out that there are more than 110,000 empty apartments in Paris, in a city of 2 million people. Which is astonishing given that there is currently a large housing shortage in the city.

So what does all this mean, given the timing of all these headlines? Actual news or political scoring for the presidential elections? Let’s just say the countdown is on to April 10, 2022.

20 French candies and chocolates to satisfy your sweet tooth

French people love sweets and candies. Along with cakes and pastries, a highly decorated box of candy and chocolates is the perfect gift to give extended family and friends. Bonbon…

The French are known for their love of bread. More than just a breakfast staple, it accompanies nearly every meal and comes in a wide variety of shapes and sizes. French breads can be long and skinny or short and round. Some bread varieties are crisp and sweet, while others are country breads…

December is always a time of merry and good cheer. And what better place to spend the holiday season than in France! Yes the weather may be rainy and windy, but under the twinkling lights at every street corner and a general…