Skip to content
With discounts up to 20-40% in shop!
Visit Sanary-sur-mer, a small seaside town on the French Riviera in Provence. We look at the best things to do in the area, where to stay, and more. 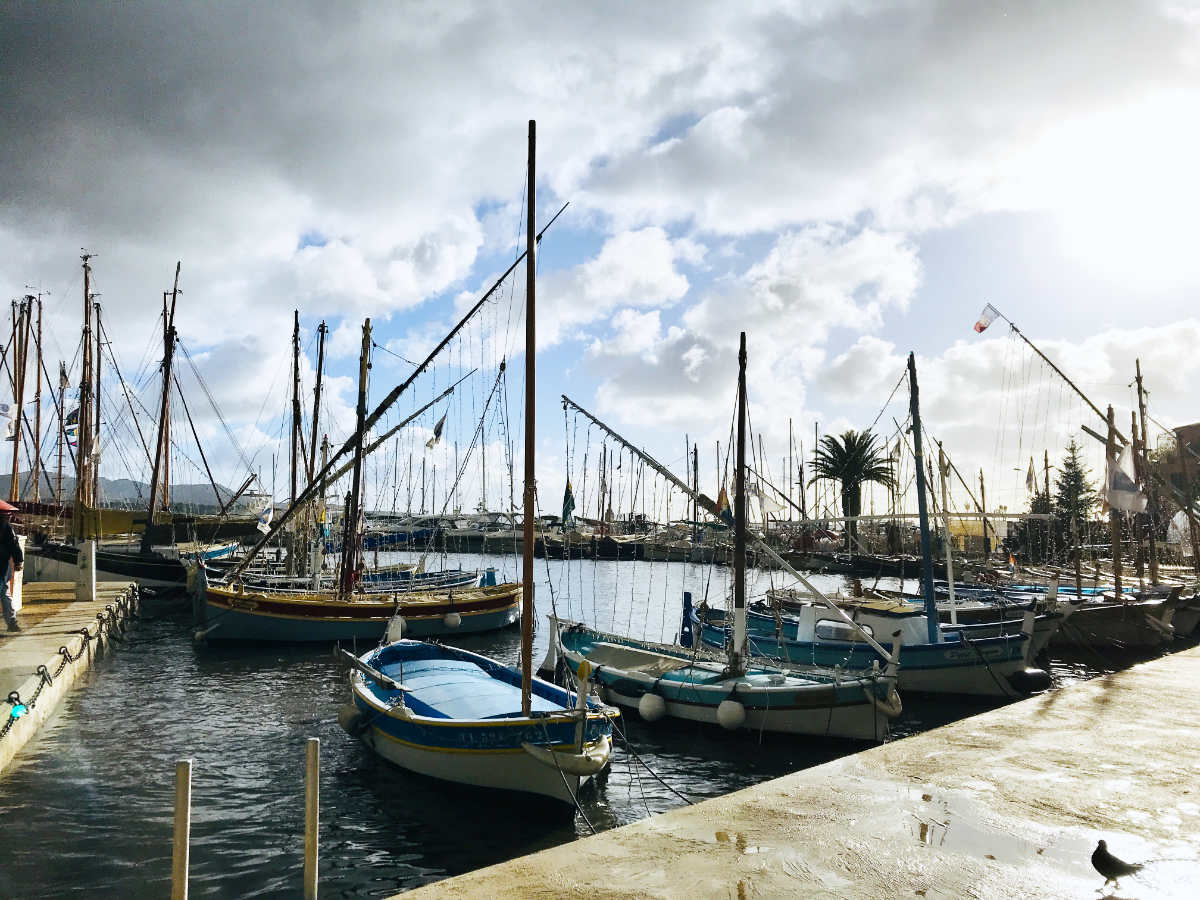 From a glance at a map, you might think that Sanary-sur-Mer was just another of the many small French towns along the Mediterranean. However, if you take time out to visit you will find a lovely seaside town that is full of provençale charm and character.

If you’re looking for a remarkable place where you can enjoy the benefits of a relaxing vacation while also being able to have access to the most beaches, open-air markets and nautical sports in the setting of a typically small French town, Sanary-sur-mer is the place to visit. Along with some of the most adorable little streets, it is also famous for being the home of famed maritime explorer Jacques Cousteau.

The French Riviera or the Côte d’Azur as it’s known in French, is the perfect place for a sunny break or to spend a weekend. The town of Sanary-sur-Mer is located in the Bouches-du-Rhone department in the Provence-Alpes-Cote d’Azur (PACA) region of France, with a population of approximately 17,000 people.

Traces of Roman and Greek civilization have been found near Sanary-sur-mer, which orginally was just a small fishing town. It grew during the Middle ages under the name “Saint-Nazaire”, before become “Sanary” in 1890.

The town was invaded by Germany during WWII, and much of it was damaged or destroyed by Allied bombardment. After the war, Sanary-sur-mer was rebuilt, with a focus on tourism.

This stretch of the Mediterranean counts several popular towns including Bandol, Cassis, La Ciotat, and La Seyne-sur-mer, all right next to each other.

At Christmas time, Sanary-sur-mer is famous for its fête des lumières, which is held in the evenings after sunset. Locals and tourists come from far and wide during this time, as the town lights up all the boats in its harbor to welcome Père Noël.

But even if you are visiting in the summer or any other time of the year, there is plenty to see and do in this area. From nocturne markets on ambling quais on a beautiful waterfront, let’s get to it shall we? Allons-y!

Much of the town center of Sanary-sur-mer is pedestrianized, with colorful pastel buildings from the post-war era. You will often find vibrantly painted fishing boats in the town’s large harbor, owing to its seafaring culture.

Unlike a lot of towns that are filled with mass-market chains, Sanary has managed to keep its small town charm, with plenty of tiny boutiques, cafés, and restaurants.

If you are looking for something unique, wander the streets and pop into a shop that catches your eye. You just may find that elusive little “something” to take back home.

Sanary-sur-mer is famous for its daily markets which were voted the most beautiful markets in France in 2018 by TF1, a major national French television station.

The markets run daily from 8am to 1pm along the main quai in town.

In addition, a larger market takes place every Wednesday morning near the Allée d’Estienne d’Orves, combining with the one along the port, on quai Charles de Gaulle.

The markets sell everything from fresh seafood, to local specialties like lavender and olive oil, as well as other souvenirs that can easily survive in luggage to take back home.

There is also a marché nocturne artisanal held at times during the summer months.

The most popular beach around Sanary sur mer is Plage de Portissol. It is a white sandy beach, and is about a 15 minute walk from the main harbor of Sanary-sur-mer. The beach allows for mobility access and there are several restaurants in the area.

Parking is an issue, but with its shallow waters that stretch out, it is a lovely beach for families.

Other popular beaches include le Lido and La plage Dorée (golden beach), which are a few miles further towards Bandol and will require a car. However, it is quite a long stretch of beach, so parking is easier and it gets less crowded.

The two beaches connect to each other, and there are a couple of beach clubs nearby to rent equipment.

On the other end of Sanary-sur-mer, you have several beaches strung together, called the Six-Fours-les-Plage, among which is the harshly named Brutal Beach.

Nothing harsh about this long stretch of beaches however, which is rocky in places, but with absolutely lovely waters for all sorts of beach activities. There are also several restaurants and cafés in the area, making it a lovely day out.

For a beautiful view of seas head over to Chapelle Notre-Dame-de-Pitié. Built in 1560, it faces the bay of Sanary and the coast of Île des Embiez. A quiet church, away from the hustle and bustle of town, this lovely church will give anyone a pause for reflection.

If you don’t have time to make the trip to the west end, right on the main quai, you will notice the impressive Eglise Saint Nazaire. Set back from other buildings along the harbor front, it is a gothic Revival church of the late 19th century. As with most churches in France, entrance to both churches is free.

If you are looking to get away from it all, head over to Île des Embiez, aka Embiez Island. It is an an island about 95 hectares in size, and along with its sister island l’île de Bendor, is part of the îles Paul Ricard.

If the name sounds familiar, it is because it is legend in these parts of Provence, as the maker of the Ricard brand of the apéritif Pastis. Ile de Bendor is quite close as well, next to the town of Bandol about 4 miles (6km) away.

The drink Pastis is practically a religion in this part of the south of France, which is how industrialist Paul Ricard made his fortune with which he purchased Bendor Island in 1950.

Today, there are 2 hotels on the island, as well as 4 restaurants, conference rooms, shops and even a tiny supermarket. There is also the old fort Saint-Pierre that has been turned into the l’Institut océanographique Paul Ricard to study marine biodiversity. Paul Ricard was so fond of the island, he asked to be buried there.

The island also a couple of arenas that have events like “cruelty-free” bull-fighting. But the reason most tourists visit is that there are a lot of nautical activities, like kayak, paddleboating, etc. that are offered on the island.

You can also rent a bike or play tennis there. Several shuttle boats run to the island during the summer months, making it easy to get to from Sanary-sur-mer.

If you are interested in the history of scuba-diving, a visit to the Musée Frédéric Dumas. Named after Frédéric Dumas, a renowned scuba-diver who was born in Toulon 9 miles (15km) away, the museum has various artefacts about the origins of diving.

In addition to Fréderic Dumas, there are also various items from the collection of a certain internationally celebrated scientist and marine conservationist you may have heard of, Jacques Cousteau.

Jacques Cousteau lived in Sanary-sur-mer in a home that is still owned by his family. A naval officer, he stayed under the radar in Sanary-sur-mer during the war, which is also where he invented the aqualung. (After the war he was awarded the Crois de Guerre (War Cross), but it is unclear exactly what his role during the war, with a few contradictions from fellow officers.)

Anyway, while in Sanary, Cousteau was good friends with his contemporary Fréderic Dumas. Along with a third friend Philippe Tailliez, who was also considered an underwater pioneer and lived in the area, the friends called themselves “Les Mousque-mers“, a play on words to “les 3 mousquetaires” or 3 Muskateers, the famed novel by French author Alexandre Dumas. The world “mer” in French means “sea”.

Entry to the museum is free, and articles donated go back several centuries.

How to get to Sanary-sur-Mer?

Sanary-sur-Mer is about 37 miles (60 km) west of Marseille, which has both a high-speed TGV train service as well as international airport with connections across Europe and the world.
From Marseille, there are TER trains that run from the main train station to Sanary-sur-Mer several times a day.

If you are looking to just explore Sanary-sur-Mer, I would recommend one day. However, for a beach holiday, this is one of the less crowded spots on the Riviera, so you could choose to base yourself here to visit other towns, villages and cities in Provence.

If you wish to stay in Sanary-sur-Mer, I recommend staying within walking distance of all the main sights and attractions:
€€€ – Holidays & Work Hotel
€€€ – Best Western Plus Soleil et Jardin

Visiting Nice: Top Things to do along the French Riviera

Avignon: The Papal city in the South of France

Visiting Sète in Occitanie: The Venise of Languedoc