Skip to content
With discounts up to 20-40% in shop!
The elegant city of Montpellier on the French Riviera has a lot to offer. Get the guide on things to do in Montpellier, where to stay, and more, in this part of France. 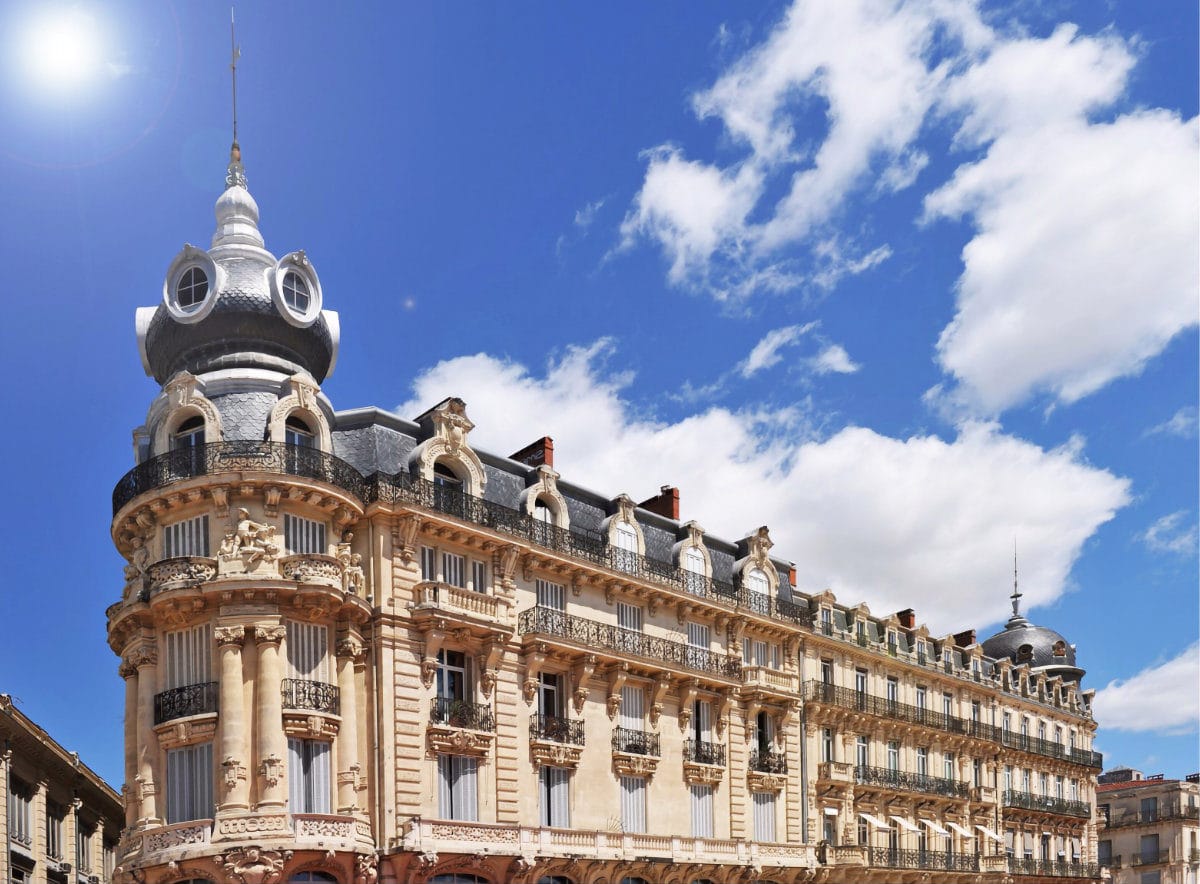 Montpellier is one of the most picturesque and deliciously quaint cities in France.  Located near the Mediterranean Sea and just 170 km (100 miles) from Marseille, it has to be on your “must visit” list when traveling around the South of France.

It has a vibrant restaurant scene, with a variety of shops and world-class museums, serving as a great base for visits to the nearby wine regions of the Languedoc and Roussillon. Without the blingy excesses of St. Tropez and Monaco, Montpellier is quietly intellectual and welcoming.

Trade, religion, universities, and medicine served as the foundation for this town in the Middle Ages and paved the way for its prosperity during that time.

Its former affluence is reflected in the medieval buildings, which serve as museums today. You can immerse yourself in the city’s rich cultural history by visiting some of the many museums the city offers.

Travel by bus and tram is so convenient within the city you will not need to rent a car or, in most cases, take a cab. In addition, restaurants in the area are excellent so plan your dining experiences.

Things to do in Montpellier

The famous Fabre Museum is housed in an 18th-century mansion that once belonged to the French artist Francois Xavier Fabre. In 1825 he donated his works to the city. Today the collections reflect numerous periods and styles including European painting from the 14th to the mid-18th century and Flemish and Dutch painting of the 17th century.

The Fabre Museum is located in an expansive green park. A lovely restaurant, L’Insense, is located next door to the museum.

Beach lovers will want to take advantage of Montpellier’s proximity to the Mediterranean coast during the summer season. However, unlike coastal towns like Nice or Villefranche-sur-Mer, the Old Town was built inland, not around a sea-port.

From the center of town, it takes around 20-30 minutes by car to go to the beaches of the Petit Travers and the Grand Travers. Other beaches nearby are Palavas-les-Flots,  the Espiguette in Le Grau-du-Roi (40 minutes away) or Aresquiers in Frontignan (50 minutes away). These are lovely for long walks, water sports, or just lazing about with a drink on a lovely warm afternoon.

There are public buses that go from Montpellier, but another option is renting a bike.

Wander around the city center, and visit the 15th-century Cathédrale de Saint-Pierre. The building started off as a monastery before becoming a cathedral and suffered mightly during the Wars of Religion.

Nearby is the Place de la Comedie, the emblematic gathering point of Montpellier. With the large Opera house on one side, along with the famous Fountain of the 3 Graces, this elegant square will remind you of Paris. And there’s a reason why; much of it was designed Baron Haussman, the same man who redesigned Paris in the 1800s.

After admiring the architecture, you can climb to the top of Montpellier’s Arc de Triomphe which was built in 1695. It is over 100 years older than Paris’s Arc De Triomphe and was dedicated to Sun King Louis XIV (the builder of the Palais of Versailles.)

In the last ten years, several chefs have left Paris to start their own restaurants in the area.

Among the best are La Diligence. This restaurant is set in a 13th-century structure, with ceilings that will remind you of a castle. Though guests can order a la carte, choosing from the 3-course set menu is not that much more expensive and will allow you to experience the fresh produce, fish, and meats the restaurant specializes in.

Maison de la Lozere is another favorite. This too is set in an ancient structure that looks a curious cross between a castle and a cave. This restaurant is actually two establishments in one: a refined wine bar at the entrance of the building, and a fine-dining restaurant in the interior.

La Reserve Rimbaud is a Michelin-rated restaurant owned by chef Charles Fontes, an acclaimed chef from Paris. Located on the river Lez, the restaurant focuses on traditional French cuisine.

If you enjoy nature, you cannot miss Pic Saint-Loup. A jagged mountain about 10 miles north of the city, it is a widely recognizable landmark in the region. Portions of the hike can be tricky, so we highly recommend that you take a guide.

After all that effort, it is time for some wine. Montpellier is a great base for visiting the vineyards of the Languedoc-Roussillon that are right outside the city. The area produces more than 1/3 of France’s wines and produces more wine than the entire United States.

Tourists who love archelogy would need to travel a half-hour outside the city to see one of the ever-changing exhibitions at the Site archeologique Lattara – Musee Henri Prades.

The museum is located about 20 minutes outside the citycenter, on the site of the ancient town of Lattara. Lattara was an important port city, between 6th century B.C. to 3rd-century A.D. Today you can explore the site discovered by Henri Prades in the 1960s and dive into the age of antiquity.

8. Take a day trip to Saint-Guilhem-le-Désert

Officially recognized as one of the Plus Beaux Villages en France (“most beautiful villages in France”), Saint-Guilhem-le-Désert is located about 40 minutes away from Montpellier. This medival village was established in around 806A.D. by Saint Guilhem who established a monastery there.

With its ancient abbey still standing, this little village will take you back into time.

A visit to the Musée du Vieux Montpellier is a special treat – but it may not be for everyone. Located on what euphemistically called the “first floor” of the ancient 13th-century Hôtel de Varennes, the museum traces the history of the city from its origins in the Middle Ages to the 20th century.

Most visitors will find the offerings in its five rooms small, and possibly not worth the effort of visiting. The museum is hard to find, and the staircase nearly insurmountable. Yet for curiosity seekers who relish the opportunity to be the only visitors in a museum, and have the enthusiastic guard/curator as their personal guide, it may be just the right thing.

If you enjoy a martini or a manhattan, why not make your way to the place that started it all. Discover the ancestral home of Noilly Prat, the makers of vermouth, one of the main ingredients in many a cocktail. But beyond cocktails, vermouth is as an apéritif that can be served by itself.

Enjoy a tasting of different vermouths with a professional guide and take home a couple of bottles as a souvenir.

This museum is located just around the medical university. If you like the international exhibition “Bodies”, you will like the offerings on display here.

The museum was first created in the 18th century and now contains more than 5,600 pieces linked to the study of human anatomy. Because of the city’s importance as a center of medicine, it might be worth a visit.

How to get to Montpellier?

With high-speed TGV access, the train station is located in the center of town, making it an easy walk for luggage-wielding tourists to simply walk a few minutes to most hotels.

The tram, adjacent to the train station, makes virtually every city in the Provence and Occitanie regions easily to reach.

Even the airport, just 20 minutes from the city center, is easily accessible by train.

How many days should you spend here?

Two days and one night should be enough unless you are planning to spend several days at the beach.

Montpellier is within 2 hours to other nearby French towns such as Aigues-Mortes, Séte, Marseille, and Carcassonne, so you can easily combine it with other destinations in the area.

If you are planning to visit Montpellier in the summer, be sure to plan your visit around the Festikite (a festival of kites) that takes place at the end of May-start of June. With a variety of water sports and kites along the beach, it is not to be missed. 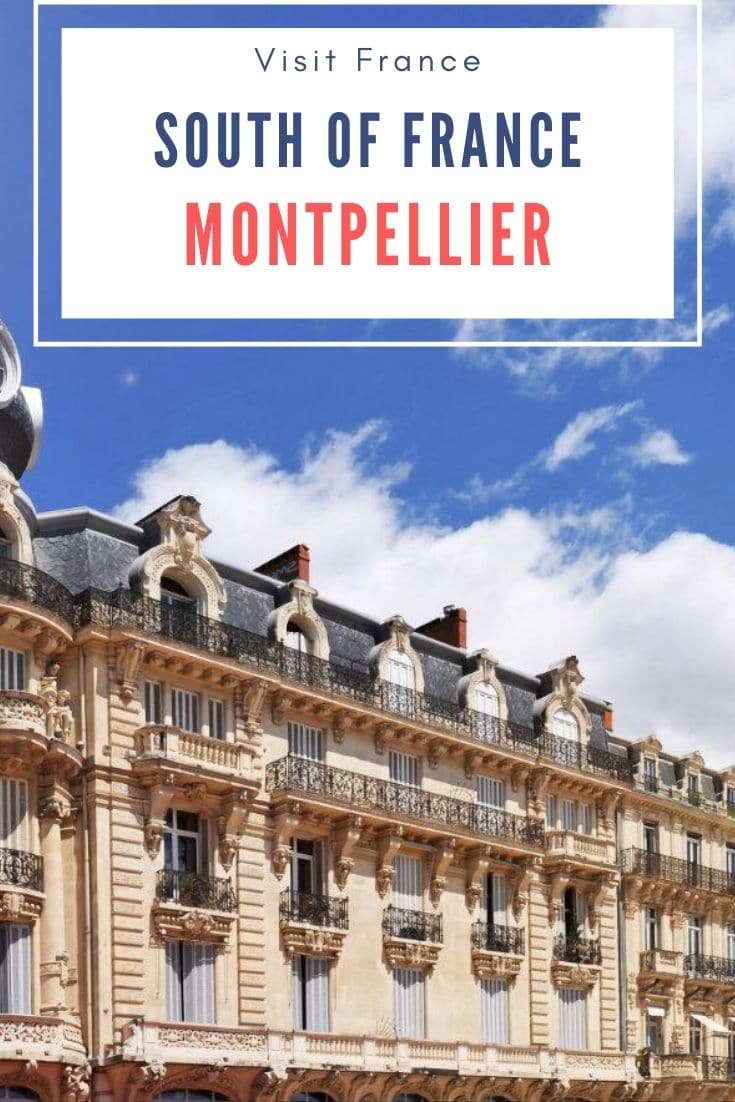 Why you should visit Paris in Winter: 17 Things to do

The Laws of Driving in France: 27 Rules and Tips to know

7 Best Things to do in Cognac, France (besides drinking!)